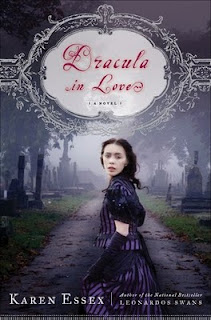 Love/Hate?: Mostly love, but things got a little frosty between us toward the end.
Rating: 3.5ish/5
Did I finish?: Y to the E-S.

Tropes: SPOILERS! The expected - vampires are sexy; make good soul mates. (I don't get it the appeal of alabaster skin on men. Or blood sharing.) Also, motherhood trumps all.

Why did I get this book?: I didn't want to be the last one to read it!
Source: Public library.
Challenges: Historical Fiction, Support Your Local Library

Do you like the cover?: Yes. I want to be that chick so desperately, right down to her gloves.

First line from book: Everyone has a secret life.

Did... I become so engrossed in Mina's telling of the story that I often found myself cursing Stoker for covering things up, as if this were a real-life tale?: YES.

Did... this book remind me of the Francis Ford Coppolla film?: Yes, due to one major plot point.

Did... I routinely stop reading just as things got good because I wanted to keep from finishing this book too soon?: YES. Such delicious torture.

Did... knowing that Essex's research was accurate make the scenes in the madhouse more awful/awesome?: YES. Seriously, sometimes the truth really is more horrifying than fiction.

Review: I'm not a vampire girl when it comes to supernatural affections. But I love classic vampire stories so I was willing to give this book a try since it was a spin-off of the original. And having been introduced the possibility of a Mina Murray with some real oomph (thanks to League of Extraordinary Gentlemen -- the graphic novels, not the film) I've been eagerly awaiting her incarnation in popular literature. Karen Essex's Mina comes close to satisfying.

The conceit is brilliant: Bram Stoker got it wrong. And with that start, the story develops as a very twisted parallel to the one originally offered, deviating here and there, revealing far more malicious and duplicitous characters than the ones Stoker presented. Purists might protest, but that's the best part: it was a man telling the story in a man's world, and Mina's experience in that world was vastly different.

Essex's research really comes out in the novel, especially regarding Seward and his work at the madhouse. The passages featuring 'treatments' at the madhouse are chilling, perhaps the most horrifying stuff in the novel and I found myself really questioning whether the Count was the villain -- or the medical community.

Sadly, my constant swoons over this book lessened as the story went on. Even though I'm not naturally inclined toward vampires -- especially as romantic leads -- I was willing to run with it (especially since every mortal man had so far been monstrous). But midpoint in the novel Mina developed the kind of sudden onset passivity seen in some action film heroines, when they transform from strong, tough characters to helpless creatures in need of a hero to make things better. Even though Mina ultimately came into her own by the end of the novel, the second half of the book left me very cold.

I found the romance between Mina and the Count to be very contrived, despite Essex's attempts to give it some romantic gravitas (which, frankly, were a little too Marion Zimmer Bradley-esque for my tastes), and I especially hated Mina's easy acceptance of the histrionic men -- immortal and moral -- in her life. After the treatment she experienced with Jonathan Harker, it was insulting that she took it from the Count. Girlfriend should have schooled the man, not let him skulk around.

Ultimately, I liked this book -- it was such a refreshingly researched take on Stoker's Dracula. As Essex explains in her Author's Notes, the era of Stoker's Dracula was one filled with abject fear about women. Illuminating that in this book is what made it so captivating and charming despite it's flat romance.
* book reviews book rating - okay