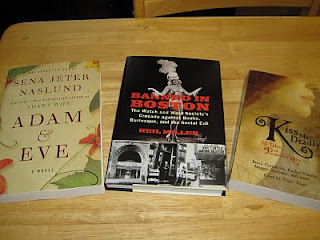 An amazing haul this week!

Adam & Eve, via LibraryThing. There seems like a metric ton of plot happening here, which could be awesome or terrible. I'm pretty excited.

Naslund (Ahab's Wife) delivers a cheesy blend of futuristic thriller, pseudoreligious speculation, and idyllic romance. In 2017, Lucy Bergmann's astrophysicist husband is murdered just before he is to reveal the existence of extraterrestrial life. Now, as the keeper of a copy of his data, Lucy's being stalked by the leaders of a sect called Perpetuity, who intend to destroy any challenge to their fundamentalist beliefs. And when Lucy agrees to transport an ancient scroll that offers an alternate version of the Book of Genesis from Cairo to the Dordogne, she becomes a double target. Lucy pilots a plane (this convenient ability is indicative of the preposterous plot) and crash-lands in Mesopotamia, where she meets a gorgeous, naked man named Adam (an American GI gone a touch nutty) who nurses her back to health in a facsimile of the Garden of Eden. Their chaste but busy domesticity is eventually threatened by the evil Perpetuity crew, and they face even more danger after an escape to France. It's embarrassingly bad in every way, from the dopey conceit of a 21st-century Eden to the paper-thin characters who spout ersatz philosophy and spiritual theorizing while enjoying the cloying clichés of romance fiction.

Banned in Boston, because I'm a Boston girl myself and I adore Beacon Press books.

“I want to be intelligent, even if I do live in Boston.”
—an anonymous Bostonian, 1929

In this spectacular romp through the Puritan City, Neil Miller relates the scintillating story of how a powerful band of Brahmin moral crusaders helped make Boston the most straitlaced city in America, forever linked with the infamous catchphrase “Banned in Boston.”

Bankrolled by society’s upper crust, the New England Watch and Ward Society acted as a quasi-vigilante police force and notorious literary censor for over eighty years. Often going over the heads of local authorities, it orchestrated the mass censorship of books and plays, raided gambling dens and brothels, and utilized spies to entrap prostitutes and their patrons.

Miller deftly traces the growth of the Watch and Ward, from its formation in 1878 to its waning days in the 1950s. During its heyday, the society and its imitators banished modern classics by Hemingway, Faulkner, and Sinclair Lewis and went to war with publishing and literary giants such as Alfred A. Knopf and The Atlantic Monthly. To the chagrin of the Watch and Ward, some writers rode the national wave of publicity that accompanied the banning of their books. Upton Sinclair declared staunchly, “I would rather be banned in Boston than read anywhere else because when you are banned in Boston, you are read everywhere else.” Others faced extinction or tried to barter their way onto bookshelves, like Walt Whitman, who hesitantly removed lines from Leaves of Grass under the watchful eye of the Watch and Ward. As the Great Depression unfolded, the society shifted its focus from bookstores to burlesque, successfully shuttering the Old Howard, the city’s legendary theater that attracted patrons from T. S. Eliot to John F. Kennedy.

Banned in Boston is a lively history and, despite Boston’s “liberal” reputation today, a cautionary tale of the dangers caused by moral crusaders of all stripes.

Kiss Me Deadly, thanks to Good Choice Reading. How excited am I for this one?!

If you can possibly thirst for more mysterious metaphysical accounts of love, Trisha Telep has organized some of the greatest and most thrilling tales of paranormal paramours since The Eternal Kiss. She presents the acclaimed literary talent of thirteen unique authors, creating a collection of stories that will undoubtedly capture the imagination of every soul who dares to read them. Werewolves, ghosts, zombies, vampires, and fallen angels drive the plot of these riveting romances.

Kiss Me Deadly includes the exceptional writings of several authors, including: