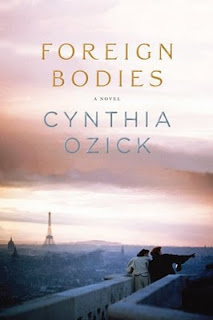 Love/Hate?: Like? Not love, not hate.
Rating: 4/5
Did I finish?: Yes.
One-sentence summary: Bea Nightingale, school teacher, becomes embroiled in lives of her niece, nephew, and brother when she's asked to fetch said nephew from Paris.

Why did I get this book?: Pretty much if it involves Paris, I'm all over it.  When it involves expats in post war Paris, then there's no stopping me!
Source: NetGalley

Do you like the cover?: Yes, the cover is very pretty, but it feels all wrong for the book.

Did... I hate every character in this book and yet, still care about what happened?: YES.  It's a little freaky, actually, how Ozick did that.

Did... I read this book in about 1.5 days?: YES, both because the pacing is pretty snappy and because it's a brief 272 pages!

Did... I want to move to Paris after reading this?: YES, although that's usually my default response.

Review: I've never ready Henry James' The Ambassadors, so I was a little apprehensive that Foreign Bodies would just go over my head.  (I wiki'd James' book to find out the gist of the plot.)  While the premise of Foreign Bodies is vaguely similar to The Ambassadors (a teacher sets out to retrieve wayward pupil from Paris), I don't think one needs to have read the latter to enjoy the former.

Rather than Henry James, I was strongly reminded of the books from the era Foreign Bodies is set, particularly Lawrence Durrell's Alexandria Quartet. Ozick's prose varies from concrete and certain to ethereal and scattered.  The characters are all vaguely amoral and unappealing.  The prose hardly plumbs anyone's motivation, not even Bea Nightingale, the heroine, which is my only complaint.  Even though we're in Bea's head, swimming in her thoughts, something about the prose keeps the reader at arm's length; when the big a-ha moment came, I hardly felt the impact.
* book reviews book rating - liked