- September 28, 2010
Top Ten Tuesday is an original feature/weekly meme created here at The Broke and the Bookish.

This week's Top Ten Tuesday is all about our favorite couples in literature.

I don't gravitate toward romantic stories, although I do love passion and sex in my fiction.  I sometimes find romantic pairings, especially if a good deal of the plot is tied up in the eventual getting together of the couple, to be tiresome.  As I made this list, I realized that many of the couples I picked aren't necessarily romantic; most are certainly not role models for healthy relationships.  Still-- I love 'em!  (NB: I stopped at about eight because I was starting to get truly silly with my definition of 'couple'; I may tackle this one again in the future because it was far more challenging than I anticipated!)

Sebastien de Ulloa & Jack Priest from New Amsterdam.  Not a favorite book, I have to confess, despite the awesome potential.  Sebastien's primary squeeze is Abigail Irene Garrett, a character I loathed, but his secondary lover is the totally dreamy Jack Priest.  As this book is made up of vignette-y short stories, one doesn't get a wholly full picture of Sebastien and Jack's relationship, but I loved what was revealed.

Nick & Nora Charles from The Thin Man.  While I do love -- I mean love -- the Nick & Nora movies starring William Powell and Myrna Loy, the Mr and Mrs Charles of Hammett's original novella are a far cry from the jaunty, good humored couple seen on the silver screen.  Their motives for marrying are questionable and they're both horrifically amoral.  Worse, they're captivating.

Sam & Grace from Shiver.  This might be the most straight-up romantic couple on my list, and certainly Shiver is one of the most romantic books.  This is the book that made me consider the possibility of being a werewolf fan. 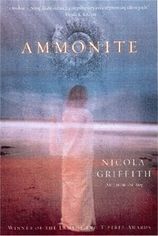 Marghe Taishan & Thenike from Ammonite.  Now this is a pairing I'm pulling up from the dredges of my memory.  It might be ten years since I've last read Ammonite and I might find my feelings about Marghe and Thenike to be changed.  But as it was one of the first straight-up unapologetically queer books I ever read, I was quite taken with the two of them.

Rumon & Merewyn from Avalon.  They're not a romantic couple and yet, they have an incredibly intimate, emotional, and tumultuous relationship in this book.  Like in Kristen Lavransdatter, there's a sweeping saga to the story, allowing these two to dip in and out of each other's lives; despite time and distance, they remain connected.

Josephine & Napoleon from The Last Great Dance on Earth.  Another trilogy with an amazing heroine in a complicated, difficult marriage.  Author Gulland created a vibrant woman in Josephine; by the end of the trilogy, I was in love with her!  Historically we know Napoleon loved Josephine; Gulland's writing makes it clear why these two had -- for a time -- such an amazing relationship.

Mannie & Mike from The Moon Is a Harsh Mistress.  Okay, so I'm definitely pushing the definition of 'couple' with this one, but I can't resist.  The Moon Is a Harsh Mistress is a guilty pleasure read, and pretty outside the norm of my typical reading tastes.  Technically, the couple of note would probably be Mannie and Wyoh, but despite their desire for each other, I didn't find their relationship as compelling as the one Mannie had with the sentient computer Mike.
meme