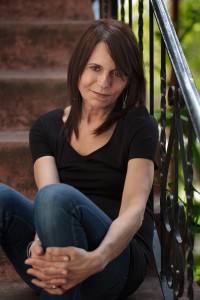 I'm thrilled to offer an interview with Thaisa Frank, author of Heidegger's Glasses.  (I'm absolutely swoon-y over it!)

You've probably been asked this a million times, but where did the idea of Heidegger’s Glasses come from? Who was the first character to come alive for you?

I guess the first person who talked to me was Elie. Over twenty years ago, when I’d written just one collection of short stories, I heard a woman’s voice from deep below the earth. She lived in Germany during World War II and was helping people answer letters to the dead. I knew her name was Elie Schacten. I knew she looked a little like my father’s mother who had died when he was six and left two children and a husband who was a Presbyterian theologian and too sophisticated to believe in heaven. (Her name was Grace and I thank her at the end of my book.)

I could feel her claustrophobia. I also heard some of the letters. I wrote sixteen pages and stopped because I knew this woman lived in a world with so many strands only a novel could do it justice. I could even hear the length, like a few musical notes surrounded by hours of silence. But I only knew how to write short fiction. Many years later, someone told me that Heidegger had had a revelation about his eyeglasses. Wow, I thought, Heidegger’s Glasses would make a great title. I wrote the book and later realized that those first sixteen pages were the DNA for Heidegger’s Glasses. I also realized that even though they were about an imaginary world, that world was launched by real events in World War II. I hadn’t known about these events when I wrote those sixteen pages. I only found out about them afterwards, when I began to write the novel.

I see you're going to be speaking at the Museum of Tolerance about your book; had you spoken with anyone at the museum about it being featured in Heidegger's Glasses? Have you heard a response from them now that the book is out?

Strangely--as with so much of the book---I didn’t know that the Museum of Tolerance existed until after the book was done. And all I know now is that they’re excited to have me. This was an interesting book to write, because I wrote first and found out “facts” later, or in the process of writing. A lot of the facts coincided with the book, making me believe that the imagination has phalanges that stretch far into the world. 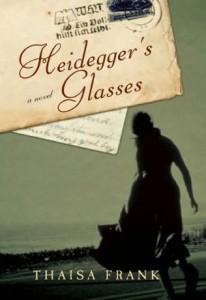 There are historical figures as characters in Heidegger's Glasses -- Goebbels and Heidegger, for example -- but are any of the main characters from the Compound historical or were they inspired by the people likely to have lived there?

There were two people helped me create the character of Asher Englehardt. One was a famous Austrian writer named Oskar Rosenkranz who lived in the Lodz ghetto. (I had seen a documentary about the Lodz ghetto after I wrote those 16 pages. And then, as if by magic, I found a book about the Lodz ghetto on a remainder table in a bookstore.) Oskar Rozenkranz was an official Scribe for the Lodz ghetto (another coincidence--I hadn’t known there were real Scribes when I heard the voice below the earth). He also wrote about ghetto life in coded diaries with an extraordinary depth of vision. His sensibility flowed into the character of Asher Englehardt.

The other person in this collaboration of character was someone I’d known in my twenties and then forgotten. But when I read his obituary in the New York Times, I realized he’d been an important force in my life, and in my sense of compassion for people in the camps. This was Stanley Adleman, whom I met long before I ever published, on a hot summer day in New York City. When I brought my broken typewriter to his Amsterdam Avenue store, I had no idea he repaired typewriters for almost every working writer in the city. I was young, in a crisis about love, and in no condition to understand anything about machines. But Stanley Adleman explained and re-explained every gear and wheel until he was sure I understood what was wrong with my typewriter and what needed to be done to fix it. Stanley Adleman seemed to hold me with his eyes and telegraphed a necessity for understanding that was so urgent, I forgot about my crisis and listened until my typewriter and its mechanisms--usually mysterious--became lucid. From the periphery of my vision, I saw blue numbers on his arm. When I left the store, I felt strangely free of concerns. And after I read his obituary, I remembered everything about him---including the fact that after that day I was never unhappy when my typewriter broke because I would be able to see him. I also realized I felt a kinship between his sensibility and that of Oskar Rosenfeld.

If you had to place an item in a trunk from your time writing Heidegger’s Glasses, what would it be?

A wonderful question. And I’ll answer it honestly.  During much of the time I was writing Heidegger’s Glasses, I was in the aftermath of a very bad divorce. I really had treasured family life even though there were great difficulties. And now I was alone with an angry teenager with a shaved head. So I supposed I would have put in the trunk things that were symbols of a time that was over: A certain stuffed animal comes to mind. My husband and I had gotten if for our son and he always slept with it, even when he was older. He was a dolphin named Monterey. I would have put Montery into that trunk.

On your blog, you mention 'the gloomy eastern europeans' as an influence. Were you always drawn to gloomy or is that something that has developed as you’ve gotten older?

I’m afraid not. I always loved Kafka, Gogol, and Schulz. But “gloomy” has a tongue in check quality to it, because Kafka, Gogol and Schulz could be absurdly funny. And then there is Landolfi, who is Italian and wrote a wonderful story called Gogol’s Wife. And The Dwarf, a brilliant novel by Lagerqvist (he won the Noble Prize in the 50s) is dark, but hilarious. There’s irony in all these works, and the healing quality that comes from being able to laugh at an absurd world as well as feel that you have fellow travelers who understand that the world is absurd.

What do you do when you’re not writing (or teaching about writing)?

I love to walk in cities. New York and Paris are my favorite cities to walk in. (I was born in New York.) Recently I was in Guanajato where walking was perilous. The streets were narrow, the old cobblestones rose up like broken teeth, and the cars always had right of way. Walking there was a constant adventure in peril---just the way walking in New York is an alliance of pedestrians, who watch the lights as carefully as drivers, and sometimes descend en masse when there’s a red light because they’ve made some silent, unilateral decision that they have right of way.

Every big city has its own dance between pedestrians and cars. I love this. And I love going to neighborhoods because they’re like different short stories. Big cities are both novels and numerous short story collections.

I also love to cook and stare into space and work out.

I loved “Remainder” by Tom MacCarthy. It’s a sort of modern Proustian story in which an amnesiac looks at a piece of wall paper and remembers something that might actually have happened to him. Since he was given a settlement of 8.5 million pounds (on the grounds that he never talk about what happened to him) he has the money to recreate what he saw by buying a huge apartment building, making everyone relocate, and hiring actors to do what he imagines he remembers. It’s an amazing book.

My thanks to Ms Frank for her wonderful answers and to TLC Book Tours for the opportunity.  You can learn about Ms Frank and her books at her website and her blog.


***
Courtesy of the publisher, I have a copy of Heidegger’s Glasses to give away!  To enter, please leave a comment with your email address (U.S. or Canada, only, sorry!) before November 29th.  The winner will be contacted then.  For a chance at additional entries, be sure to comment on my review of Heidegger's Glasses!
* interviews