Mistress of Abha by William Newton 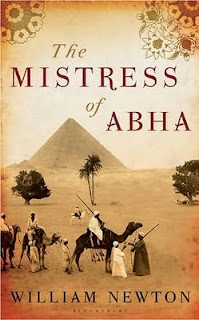 Love/Hate?: Meh.
Rating: 2.5ish/5
Did I finish?: No, although I skipped to the end.
One-sentence summary: British colonialist is swept up in romantic reverie for the Arabia of his father's tales and follows his footsteps.

Why did I get this book?: I'm interested in the history of the Middle East.
Source: LibraryThing

Do I like the cover?: No. I mean, it is very pretty, but the novel takes place in Saudi Arabia. There is no call for a pyramid.

Did... I feel excessively grateful for the classes I took on Islamic history back in college?: YES.  There's a small map and a very brief list of major players at the beginning of the book, but hoo-boy, Newton doesn't bother explaining anything.

Did... I eventually find myself wishing my commute were shorter so I could stop reading?: YES.  When I found myself twice stopping this book with a good deal of my commute left, I decided to call a spade a spade and quit.

The narration has a very odd sense to it and I can't tell if it's simply Newton's style of writing or if it's an attempt at giving the narrator, Ivor Willoughby, some personality.  The story is first person but Willoughby constantly comments on his own story.  If he says something odd to another character, he observes it; if he does something strange, he points it out.  It's slightly clunky but grows familiar as one reads on, and I found it vaguely endearing -- until it grew tiresome.

I think the intent is for this to be a kind of epic saga -- son searching for his father - but I found it awkward and clunky and slow.  There's a lot of politics and a lot of skirmishes but the narration and storyline just bored me to no end.  And, ultimately, the story at it's root was just so unappealing to me.  I'm not a huge fan of infidelity especially when it's part of the hero's grand romance; that, coupled with the very disturbing exoticization of the slaves, concubines, and other women in this book, left me feeling pretty gross.  I'm all for a good cross-cultural romance, but when a married English officer takes on a second wife because he's all Arab 'at heart' and hates his life back in England, I find that selfish, not romantic.  The narrator is very pro-Empire and colonialisation, which is accurate for the setting of the story (pre WWII, post-Lawrence of Arabia), but as a result, it's a mixture of white man's burden and the noble savage motif.  It also feels a bit like cheap shorthand to create an epic quality to this story.  In the end, the awkward style kept me from being fully pulled in and what I did absorb turned me off.
* book reviews book rating - disliked book rating - unfinished