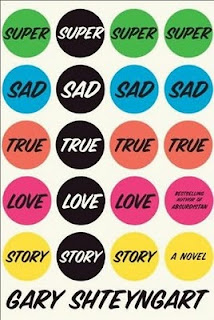 Why did I get this book?: It was available as a get-it-now e-book on a day when I couldn't find anything to read.
Source: Public library
Challenges:  Support Your Local Library

Do you like the cover?: Eh -- its nothing special.  Adds to hipster feel of the book, though.

First line from book: Dearest Diary, Today I've made a major decision: I am never going to die.

Review: This book is more hip than I am so I'm probably not as swoon-y about it as I should be. Don't get me wrong; the book is good, but there were some aspects of it that didn't resonate for me.  I'll admit up front that the sexual misadventures of a 40-year old white guy aren't really going to move me much so I was feeling rather hostile toward the start of the novel.  Shteyngart's heroine, the 24-year old Eunice Park, daughter of Korean immigrants, is portrayed stereotypically, right down to her mother's broken English.  Things were a little rocky to begin with BUT as the book went on, I actually got caught up in Lenny and Eunice's story.  I kind of cared about what was going to happen to them!  And at the book's end, I was surprised to find I was satisfied and moved.

The book is set in the ambigu-future which is both hilarious and chilling.  (See my Teaser Tuesday for a snippit.)  It's sort of Tea Party-gone-mad (politically, not Alice-in-Wonderland-y) in which corporations have all merged into mega-corporations and the US government is on the verge of toppling, mostly due to an unceasing-and-expensive war with Venezuela (v shades of Afghanistan/Iraq).  Society is hypersexualized and technology -- especially social media -- has accelerated in importance to the point that every person is wired up and connected, rated and ranked by their peers.  Lenny is stuck in an era in which people read books; Eunice is acutely aware of social standing and popular culture.  They're an unlikely couple, both  motivated by selfish desires, and we watch their relationship unfold as each confesses their side of the story: Lenny, in his diary and Eunice, in long emails to friends and family.  Shteyngart's world building is fantastic: there isn't a metric ton of exposition about how things ended up the way they did and there's no learning curve for the reader.  We're immediately immersed in this hostile, aggressive, judgmental society, a bit like Lenny, looking to find our footing.
Labels: * book reviews book rating - liked