February 16, 2011
Late in January, I read and loved Small Wars by Sadie Jones.  It's an intense, beautiful, understated book that moved me.  I can't recommend it enough!  I'm thrilled to share my interview with Sadie Jones.

You said in interviews that your novel was inspired by the current conflict in Afghanistan and Iraq. What sparked the connection between the those conflicts and the historical one in Cyprus?

At first, with no thought of making a fiction of it, I became preoccupied by the inner lives of soldiers; how they reconcile the person they have to be in action with the person they must be with their wives and families. There were a lot of reports at the time of psychological damage, and broken families, that often ran alongside all reports of wrongdoing in the military or dissent about the reasons for war in the first place. It struck me that PTSD – often seen in isolation – is not indivisible from the conscience, and that this was not being discussed. It is easy to see, looking down history, that action undertaken in conflicts that are seen as ‘moral’ or ‘clean’, being more easily defended are therefore more easily reconciled. I had no thought of making a book out of it, until I stumbled across Cyprus, and was immediately, viscerally, reminded of the landscape of the Middle East. I suddenly imagined a real soldier, and a marriage, and his country, that he loved, betraying him. The 1950s liberated the story, and allowed it to be universal.

Were there any surprises in the novel that came out as you wrote -- a character or scene that was unexpected?

The character of Lieutenant Davis, the interpreter, who is key to the story, was a relatively late development. Looking back it’s hard to imagine, but he insinuated himself into things once the story was largely plotted. At one point he threatened to take the thing over because I enjoyed his particular brand of weakness so much. As to scenes, occasionally I’ll go into one knowing there must be an argument, say, and what the result will be, only to find that the characters have a greater integrity than I, in my cool plan for them, and refuse to be manipulated. They might not be as angry as I thought, or angrier, or make statements that I had not thought they would, leaving me to adjust them to the story and not the other way around. 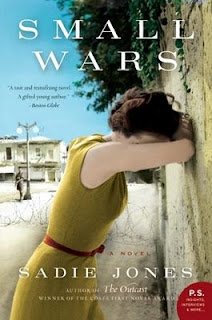 Did you have a chance to travel to Cyprus for your research?

I have travelled to Greece and to Turkey quite a lot in my life, but I didn’t get there until half-way through the book - about a 18 months into the process. I had researched 1950s Cyprus so thoroughly that the 21st Century island was a shock. It took me a while to reconcile the two. The army base at Episkopi, though, is almost unchanged – all the ‘50s housing stock is still there, as it was.

Are you working on anything now?

When you're not writing, what do you like to do?

Spend time with my family, cook, eat out, read, go to movies and galleries and ride.

The Existential Detective, by Alice Thompson is a gem. I was awed by Never Let Me Go; Ishiguro Kazuo. I am rereading Madame Bovary which – as all great books are – is a different book at every age, and I’m halfway through, and enjoying, Tim Winton’s Dirt Music.

My thanks to Sadie Jones for taking the time to answer my questions as well as Trish with TLC Book Tours for facilitating this!

Weekend reads, or life in the sugar shack 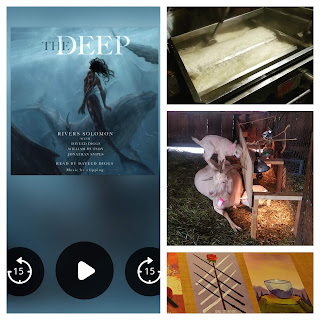 I really hate February as a rule: it's so gray, and cold, and snowy, but not in a pretty way; there aren't enough warm days to make it feel springy, and the rain is still wintry cold and makes me feel achy.

Farm life has made February more bearable in the last few years: we get baby animals, including some hilarious kids most recently; and sugar season starts.

Our second home the last few weeks has been the sugar shack, where my wife and other staff boil the maple sap for 12 hours a day. The small wood shack gets steamy and smells of maple, and is warm and cozy with children and dogs.

My weekend read this weekend is the audiobook of The Deep by Rivers Solomon, read by Daveed Diggs. It's an incredible listen but I'm not surprised, given how amazing Solomon's previous novel, An Unkindness of Ghosts, was.

What are you doing this weekend? Will you be reading anything?
Read more