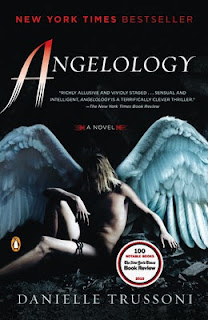 Rating: Enthusiastic like.
Did I finish?: YES -- couldn't stop.
One-sentence summary: Angels are among us, and they aren't very good.

Why did I get this book?: I'm a sucker for biblically-inspired paranormal plots and nuns as heroines.
Source: TLC Book Tours

Do I like the cover?: Yes -- has the dark, sexy feel of the novel's angels.

Did... I totally resent having to stop reading to do everyday life things?: YES.  As you can see from my GoodReads updates, I was having a great time with this book.

Did... I love having nuns as action heroines?: YES.  Honestly, that needs to happen more often.

Did... I spend a ton of time Googling the Devil's Throat gorge to see if it was real?: Yes, and the pictures are astounding.  Gorgeous!

Review: I have to confess, I'm pretty demanding of my adventure/thriller novels.  I'm picky about plot and impatient with lazy characterization, and I have to say, in Angelology I found yummy plot and engrossing characters.  Neither Dan Brown or Kate Mosse really engaged me as a reader, so the comparisons to them made me hesitant.  But from the first handful of pages, I was ensnared by this story in a way I hadn't with a Brown or Mosse novel.  I believed the mythos being offered, I believed the characters, and I cared about what was going to happen to them.

The novel begins in third person, following nun Evangeline and a researcher, Verlaine; a hint of the novel's overarching mystery is introduced, and secondary characters pepper the plot.  In the second part of the novel, the focus switches to first person reminiscence by one of the aforementioned secondary characters.  Rather than feel abrupt or out of place, this section breathes life to the possibly overwhelming back story.  Set during the second World War, it's a supernatural historical that I just gobbled up.

The final section of the book felt the weakest to me: the story became very then-they-did-this-and-then-they-did-that and there was a romantic element that felt super abrupt.  It was noticeable to me because the first three sections were very meaty, with a good balance of plot and character development.  The story has a bittersweet close and a bit of a cliffhanger, and I am happy to see Trussoni is working on a sequel.

Giveaway!  Thanks to the publisher, two lucky winners will get a copy of Angelology!  To enter, simply comment with your email address. Ends April 2nd.  US/CA only, I'm sorry!