Heart of Lies: A Novel by M.L. Malcolm 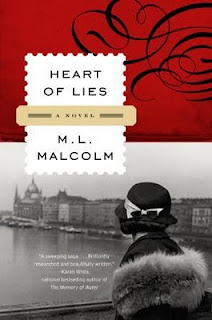 Do I like the cover?: Yes!  Isn't it pretty?  It's romantic and atmospheric and hints at the setting.

First line: He had not spoken to Julia since the day he ended their affair.

Buy, Borrow, or Avoid?: Borrow, I suppose, or skip -- I've started the sequel and find that the recap provided sets the story up well and is slightly  more enjoyable than this one.

Why did I get this book?: The setting, the era, and the promise of some romance.  It had been on my TBR for forever and when I was offered a chance to review the sequel, I couldn't wait!

Review: From the other reviews I've seen I know I'm in the minority here, but I disliked this book.  And I tried really hard to like it because it is so up my alley (and I'm reviewing the sequel!).

I found myself describing this book to friends as watching a movie with gorgeous scenery and a very exciting plot and two super pretty and super wooden actors in the lead.  I found Malcolm's writing to be very telling (rather than showing): I was told the heroine was a 'firebird' but she didn't do anything to warrant such an interesting description; I was told the hero was charming but what he did seemed creepy at best and sociopathic at worst.

History provided all the plot and Shanghai in the '20s and '30s was a tumultuous place, but the story just felt boring and busy all at once.  Despite the promise of two interesting characters, only Leo got any real face time, which further enhanced my inability to connect with or care about the other characters and his behavior was so repugnant I wasn't that interested in connecting with him.

My next comment might be a spoiler, so skip to the next paragraph if you care.  From the moment she walked onto the page, heroine Martha was clearly expendable.  She could have been so interesting, but instead, remained flat, merely a foil for Leo, a very pretty bauble to dance out when we needed to be reminded of all that Leo had to lose.  Continuing the telling-not-showing vein, we're subjected to lots of scenes of men lusting after her because she's so interesting and vibrant, but in the text, all she actually did was smile prettily and blink back tears most of the time.  Her death was clear from the middle of the book and it was just a matter of getting to the page where it happened.

I suppose I should say that another book everyone loves and find so romantic, The Time Traveler's Wife, I found to be creepy and wholly unromantic.  Many bloggers who have great tastes love this book, so it may just be that Malcolm's writing and I don't gel.  (I say this because I'm three chapters in to the sequel and getting huffy.)  In the end, I'm very sad I wasn't fully in love with this book but that isn't to say others won't find something in it that I couldn't.
* book reviews book rating - disliked