The Lost Flamingoes of Bombay by Siddharth Dhanvant Shanghvi 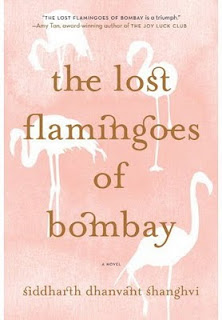 Rating: Liked
Did I finish?: Yes
One-sentence summary: The tragedy of fame and the pressure of creative genius dog four artists in Bombay.

Why did I get this book?: Fitzgerald was thrown around; I couldn't say no!
Reading Challenges: South Asian
Source: LibraryThing

Do I like the cover?: Not really.  It feels like a throwaway.  As Karan's photography is the focus of the novel, I would have loved a black and white photo of Bombay instead.

First line: 'Oh, God, Iqbal,' Karan Seth said, looking warily at his boss, 'you sound like you're setting me up for trouble.'

Review: This novel is a bit like a tabloid-tell-all, set in Bombay, and I mean that in the best way.  A reclusive pianist, a Bollywood star, a repressed artist, a Nick Carraway-ish photographer: the cast is appropriately superficial and self-destructive and yet, as we -- and Karan Seth, the outsider-turned-insider -- discover, there's depth and passion and fear.

I wasn't sure what I was getting into as the jacket blurb is fairly vague (but mentions Fitzgerald, which caught my interest).  There is a sort of Fitzgerald feel to the novel -- the glitzy tragedy of those who invite heartbreak and disaster -- but Shanghvi managed to make (most) of the characters real enough that I still felt for them.  A kind of frenetic sadness infuses the story, which is part bildungsroman, part crime thriller, part celebrity expose.

There's a real crudity in the writing but I found it emphasized the frenzy of celebrity, the repressed sexual nature of the characters and the world they lived in.  Sensitive readers will likely be turned off by the language and at times it felt nearly misogynistic but isn't entirely out-of-place given the tone of the novel.

Whereas Shanghvi's narrative prose had me in swoons, I found his dialogue stiff, stilted, and unbelievable.  I think the attempt was to make the characters sound superficial but it read, for me, inauthentic and archaic.  (Shanghvi has the characters using some very odd, dated slang and I kept flipping to the front of the book to see if this was a problem with translation.)  Honestly, it felt like two different people were at work in this book.

At times, the novel felt a little long: enormous day-to-day detail around some events and then a leap of four years or ten years.  The expansion and growth of the characters was appealing, but for me, the story would have had more oomph if it stopped sooner.  In this case, the pathetic ends weren't poignant or moving, but simply sad, draining the tension that had been so deliciously built up.
* book reviews book rating - liked