April 12, 2011
Teaser Tuesdays is a weekly bookish meme, hosted by MizB of Should Be Reading. Anyone can play along! Just do the following:


- Grab your current read
- Open to a random page
- Share two (2) “teaser” sentences from somewhere on that page
- BE CAREFUL NOT TO INCLUDE SPOILERS!
- Share the title and author, too, so that other TT participants can add the book to their TBR Lists if they like your teasers 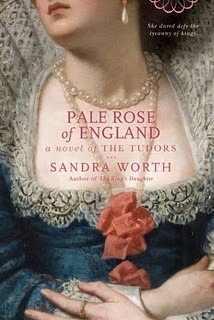 The prior was a figure of misery as he stood rubbing the edge of his crucifix between his fingers.  He was thinking of the beautiful young woman in the tawny sea gown who had stood before him little more than a week earlier, her babe asleep in his nurse's arms, her handsome husband at her side.  They had come with such high hopes, such noble designs for the kingdom, and now here they were, their doom fast approaching.  Though he was a man of faith who would never question God's plan, sometimes the uncertainty of human destiny and its tragic consequences brought him to the edge of grief.