Armchair BEA interview with Cait of The Cait Files

I've had the pleasure of getting to meet Cait of The Cait Files, a new-to-me-blogger, thanks to Armchair BEA, and I'm thrilled to introduce her to my readers!  To learn a little about Cait, check out her Armchair BEA intro and read on!

If you're comfortable with it, would you share with us what you're studying at university?
I study philosophy! Actually, I finished it, I'm just doing my final exams now =/

What's your favorite article of clothing?
Gahh hard one. Hmm. I love a lot of my clothes! Okay, I have 3, that'll have to do I'm afraid...I have a hat shaped like a mouse which my bf bought my for christmas! It's soooo cute. Erm then there's the dress he bought me for Christmas which is a really nice bronze colour with long floaty sleeves and a lace bodice. and finally my blue blazer with elbow patches-I love that!

What was the oddest/weirdest/most fabulous thing you wanted to do 'when you grew up'?
Omg I've wanted to be everything. The oddest is probably a chocolate taster...I was convinced I'd make an excellent chocolate taster. My grandparents encouraged this dream, which probably wasn't a good idea. Other than that I really wanted to be an astronaut! 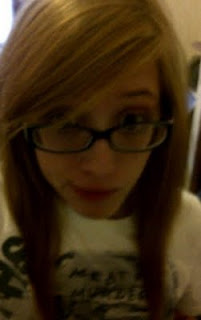 You've been given a paid three-week getaway to anywhere in the world. Where would you go and who would you take?
oooooh this is a hard question! There's so many places I want to go...I would take my boyfriend and...can I cheat and do like a tour of europe? despite living in England I've not travelled to that many places in Europe! If I had to narrow it I'd probably say Japan.

You have to turn a book into an ice cream flavor. What book do you choose, and what does it taste like?
I would.....turn The White Darkness into ice cream. It would taste like milk, with a verrrrry slight hint of strawberry at the end.

If you could spontaneously read and understand another language, what would it be, and who is the first author you'd read in that language?
Latin! I've always wanted to read latin. and I'd want to read Cassie Clare's books first. I think Jace's sarcasm would be hilarious in latin.

When you aren't reading and blogging, what do you like to do?
I watch TV alot! It's a student thing. I love the Vampire Diaries and Pretty Little Liars, but I also like a lot of sci fi and cooking shows. I love shopping also! I also spend alot of time in the uni library pretending to be working =/

Which do you fear more: public speaking or heights? Have an experience with either?
Public speaking! I get so nervous. I had to do a debate speech once, in my history class about whether Emily Davidson was insane or not when she threw herself in front of the horse...it was scary. I came second tho XD I'm honestly not fussed about heights, never have been.

And finally, describe your perfect reading room/situation.
Ooooh it would be like an old fashioned victorian library, with floor to ceiling bookshelves and those lil moving ladder stairs. I'd have big chesterfield sofas with loads of pillows in front of a huge roaring fire and loads and loads of my favourite snacks and drinks on hand. and obviously books filling my shelves!
armchair bea