Over the last week or so I've been engrossed in Anne Easter Smith's newest historical novel, Queen By Right, and so am very excited to share my Q&A with the author.  Read on to learn a little about her, her writing process, and the book -- and don't forget to enter the giveaway!

Great question Audra, and the first anyone has asked me that. I am embarrassed to say I tried writing a Georgette Heyer book of my own when I was 19 and going back and forth on the train to work in London from my home in Surrey. I got nine chapters in and then could not make up my mind where I was going with the story -- bland and romantic or gothic and melodramatic! So I quit. Next time I attempted a book was in my 50s when I wrote “A Rose for the Crown,” my first novel (and I thought my only) about the York family in the Wars of the Roses.

I like to do exercise and chores in the morning, have a quick lunch and then go to my office two blocks away at 1 p.m. I usually write until 6 p.m. and then shut up shop and go home. Sometimes I am not writing, sometimes I am spending hours researching, but that’s my usual schedule. I seem to be productive in the afternoons. 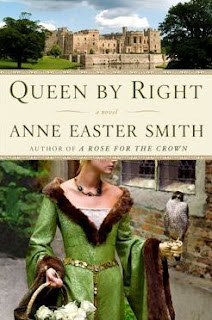 Was Queen By Right the original title of your book?

Oh no! I had such a hard time coming up with a title that would resonate with readers and satisfy my editor’s need for something royal in the tile!! I wanted to call it by Cecily Neville’s nickname “Rose of Raby” but she nixed that as too obscure. I toyed with “The Duke’s White Rose” but then a fellow Richard III Society member reminded me that Cecily used to call herself “Queen By Right” when her son Edward became king (she thoroughly disapproved of Edward’s marriage to the upstart Elizabeth Woodville who would now be called Queen Elizabeth and wanted to show her that she, Cecily, should really have been queen, had her husband Richard, duke of York, survived the Battle of Wakefield).

As you were writing Queen By Right, was there a particular scene or character that surprised you?

I was not expecting to bump off two of my big characters--I shan’t say who and when--but I cried when it happened.

According to your bio, you're also a singer. What are some songs/singers that might make up a 'soundtrack' of Cecily Neville or this novel?

Golly that's hard, Audra. Most of the music Cecily would have enjoyed would have been by people like Hildegard von Bingen and Josquin Desprez, who probably wouldn’t make the charts today! I am sure I could find some favorite folk songs that I used to sing -- Judy Collins was a favorite (I no longer do folksinging, Audra. Nothing worse than a warbly old lady trying to sing “Blowing in the Wind”), but as I am writing this on the road on tour, I can’t access my songbooks right now!

Yes, I have recently read (for the first time, I’m ashamed to say) Wuthering Heights. I enjoyed the language and the images Emily Bronte conjured up, but I can’t say I like Catherine and Heathcliff much! I’m more of a Jane Eyre person myself. I also loved a sweet story by fellow Brit Helen Simonsen, Major Pettigrew’s Last Stand. It was charming. I do have several books waiting to be read like Edward Rutherfurd’s New York, and a couple by Sharon Kay Penman that I never seem to get time to dig into as I am on such a crazy writing schedule. Already 50 pages into my next book due July 2012.

GIVEAWAY!  I'm thrilled to offer a copy of Queen By Right to a lucky reader! Leave a comment on this interview (with email or a way to contact you) to be entered. Ends 6/10, US only.  For another entry, be sure to comment on my review of Queen By Right which will be posted on Tues, May 31st.
Labels: * interviews