The Rebellion of Jane Clarke by Sally Gunning 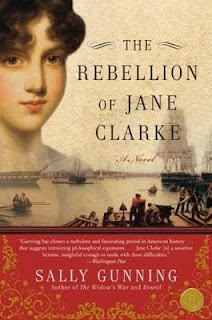 Rating: Enthusiastic like.
Did I finish?: Yes -- it was very un-put-down-able!
One-sentence summary: A young woman from Cape Cod moves to Boston and receives an education in love, politics, and self-reliance.
Reading Challenges: Historical Fiction

Do I like the cover?: Yes, desperately -- it exactly conveys the setting and feel of the novel. Fabulous!

First line: Jane Clarke stood in the sedge growth on the lip of the dune and looked out over the half-drained bay, the ribbons of sand rising up through the retreating water.

Is...this novel both breezy and meaty?: YES.  Weird, but true.  It reads very easily, with a number of engrossing plots that are tasty and fun and a heroine with some moxie, backbone, and brains.

Did... I have to hit up Wikipedia a few times?: YES, but that's my fault, because apparently I've retained nothing of my education on the American Revolution.  Me and two coworkers couldn't remember why James Otis was significant, other than having an awesome cousin.

Did... I not want to live in Boston in this era?: YES.  The mess, the smells, the stress -- this novel was great at quickly painting and conveying the feel of colonial Boston, and it's not nearly as romantic as in my mind's eye.  Loved this for the grimy reminder of my hometown.

Why did I get this book?: Pretty much, if it involves Boston, I'm there. That it was a historical only meant I was especially desperate to read it!!

Review: I'm a bit at a loss at how to describe this novel -- but in a good way.  Set around 1770 in tumultuous Massachusetts in the months leading up to the Boston Massacre, this novel features a young woman, Jane Clarke, who is sent from her childhood home on the Cape to care for an elderly aunt in Boston.  There, she finds herself struggling to understand the fomenting rebellion in Boston and the reasons her family and friends passionate support or don't support it.

What I most enjoyed about this book -- what I kept pointing out to my wife and friends --
was the very realness of the heroine, Jane Clarke. There's so much more to this novel than just girl-on-the-cusp-of-womanhood as a parallel for the burgeoning American revolution; it felt to me to have some of the same inner turmoil and character development as a good bildungsroman (think Catcher in the Rye, but female, set in colonial America.  Ish).

Unlike many historical novels that feature history as a background character with a hot romance as the star, this novel developed a number of themes that were very thoughtful explored -- and not necessarily neatly resolved.  I found the story and characters moving but not sentimental; the dramatic events Jane experienced were exciting but not cartoonish or over-the-top.  Jane's behavior as an independent woman was very real to me, grounded in and responding to the events around her.  Most of all, I liked her -- and many of the secondary characters.  There's some romance, some mystery, some intrigue, some red herrings, and a very good twist near the end.  (Get it now and read it by the fourth of July to be especially nerdy for your holiday celebration!)

GIVEAWAY!  I'm thrilled to offer a copy of The Rebellion of Jane Clarke; just comment with an email address to be entered.  US/CA readers only, ends 5/20.  For another chance to enter, please come back on Thursday for my Q&A with the author.
* book reviews * giveaways book rating - liked