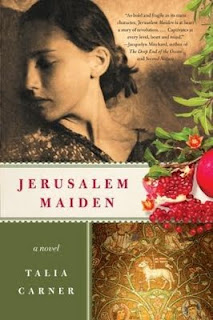 Do I like the cover?: Yes, although I wish it featured a historical image of Jerusalem.

First line: Esther's hand raced over the paper as if the colored pencils might be snatched from her, the quivering inside her wild, foreign, thrilling.

Is... Carner's Jerusalem a lovely example of place-as-character?: YES. I absolutely felt the city and how it's various quarters affected and shaped much of Esther's story.

Did... I yearn to see Esther's paintings in real life?: YES.  Esther's art was inspired and influenced by the movements I love -- Impressionism, early Modernism -- and I eagerly imagined her contribution.

Buy, Borrow, or Avoid?: Borrow for sure, buy if you can -- this beautiful book begs slow reading and lending to friends.

Why did I get this book?: The setting -- Jerusalem -- and the era -- early 20th century and the topic -- a woman's challenge with her faith and her creative calling -- was too delicious sounding to resist!

Review: Having just finished this book, I'm still flailing (internally) and sort of waving my arms because I'm so caught up in the bittersweet ending and the story of the characters. This was a beautiful, moving novel.

The setting of this book was wholly alien to me and yet Carner's writing and brilliantly conceived characters plunged me into the story and Esther's world.  Esther might be one of the most moving and compelling heroines I've read in a long time: her complicated relationship with her faith, her God, her family, and her community was gripping.

The early 20th century was a tumultuous time in the world: the Ottoman Empire was crumbling, leaving residents of Jerusalem with famine, outbreaks of disease, conflict among the various communities, a loss of infrastructure; and later, World War I would cause further hardship. For the Esther's Haredi community, waiting for the coming of the Messiah, things are especially difficult, and she chafes at the life her family and her God has envisioned for her, one that, most tragically, requires her to give up her passion and talent in painting.

While this is such a sad story, I found it beautifully written and easy to read. Despite Esther's life being so unlike mine, her emotions and responses were so authentic, I could appreciate and relate to her and I cared so very, very much about how things would turn out for her. I think this would a fantastic book for discussion groups and book clubs, and anyone interested in novels about unusual faith communities. Or, frankly, any reader who wants to be caught up in a beautifully told story.

GIVEAWAY!  I'm thrilled to offer one reader a copy of Jerusalem Maiden.  Just leave a comment with your email address.  Open to US/CA readers, closes 7/1.  For another entry, comment on my interview with Talia Carner.
* book reviews book rating - liked