In Her Wake by Nancy Rappaport 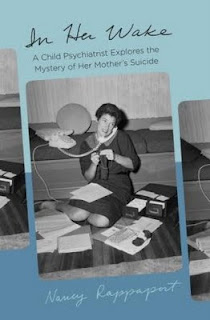 Title: In Her Wake: A Child Psychiatrist Explores the Mystery of Her Mother's Suicide
Author: Nancy Rappaport

Rating: Liked a great deal.
Did I finish?: Yes -- it really was un-put-down-able!
One-sentence summary: A Boston-based psychiatrist recounts the story of her parent's marriage, her mother's suicide, and the subsequent impact on her family's life.
Reading Challenges: None.

Do I like the cover?: Yes -- it features a picture of the author's mother and feels a bit retro to me, reminiscent, perhaps, of the 1960s setting.

First line: The day my mother killed herself, she had just finished preparing her house on Marlborough Street for the anticipated return of her children after a fierce custody battle with my father.

Buy, Borrow, or Avoid?: Borrow for sure -- I think it could appeal to many readers for the myriad of angles Rappaport explores, and it's very low on the salacious scale.  I'm planning to buy a few copies as gifts for the Boston history buffs I know.

Why did I get this book?: Primarily the Boston connection.

Review: I don't read many memoirs, especially family-oriented ones: I'm prone to flash judgments and over empathizing; I can shake off fiction that rattles me but nonfiction sticks a little more.  Still, this Boston-based memoir attracted me so I started it with some apprehension.

Very quickly, I saw how courageous Rappaport was as she tackled the story of her parent's marriage, her mother's suicide, and her father's subsequent parenting choices since she, her father and stepmothers, and many of her siblings still live locally.  Her professional training as a psychiatrist showed through on every page: she acknowledged when her research frightened her family and offered many opportunities for her father to have his say about the story she was telling.  At moments, I was impatient with her fair-minded and even-handed presentation: I wanted her to be critical or judgmental -- even mean.  But in the end, she won me over (despite my muttering about her father and stepmothers) by going beyond simply recounting the days leading up to her mother's death.  She explored the facets of abuse, infidelity, mental illness, addiction, and grief that impacted everyone in her family in a readable way that didn't feel too technical or dry nor too salacious or torrid.  As her family has enormous connections in Boston's history, politics, and development (her grandfather was the lawyer for Vanzetti of Sacco and Vanzetti, for example) and Rappaport provides enough background to give the reader some appreciation of how publicly her parent's lived.

This is another book I've spent all week talking about to almost everyone I know.  While I've never had someone close to me commit suicide, I was still able to appreciate Rappaport's looks at her family and how this painful event (and the moments before and after) impacted all of them -- and see some of my own familial pain, however dissimilar, in her story.  This quiet memoir is moving but not soul-crushing, readable and genuine.
* book reviews book rating - liked