July 19, 2011
Teaser Tuesdays is a weekly bookish meme, hosted by MizB of Should Be Reading. Anyone can play along! Just do the following:


- Grab your current read & open to a random page
- Share two (2) “teaser” sentences from somewhere on that page (be careful not to include spoilers!)
- Share the title and author, too, so that other TT participants can add the book to their TBR Lists if they like your teasers 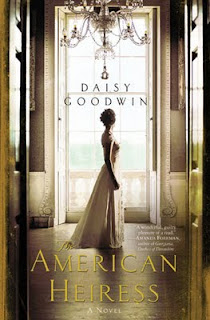 This week's teaser is from the delightful The American Heiress by Daisy Goodwin. My review is coming this morning but I just had to share a bit of what hooked me early on.  This is our first introduction to the heroine, Cora Cash, and honestly, I laughed and gasped and read on eagerly for more.

In the Blue Room, Cora Cash was trying to concentrate on her book.  Cora found most novels hard to sympathise with -- all those plain governesses -- but this one had much to recommend it.  The heroine was 'handsome, clever, and rich', rather like Cora herself.  Cora knew she was handsome -- wasn't she always referred to in the papers as 'the divine Miss Cash'?  She was clever -- she could speak three languages and could handle calculus.  And as to rich, well, she was undoubtedly that.  Emma Woodhouse was not rich in the way that she, Cora Cash, was rich.  Emma Woodhouse did not lie on a lit à la polonaise once owned by Madame du Barry in a room which was, but for the lingering smell of paint, an exact replica of Marie Antoinette's bedchamber at le petit Trianon.  Emma Woodhouse went to dances at the Assembly Rooms, not fancy dress spectaculars in specially built ballrooms.  But Emma Woodhouse was motherless which meant, thought Cora, that she was handsome, clever, rich and free.
meme teaser tuesday