Cocktail Hour Under the Tree of Forgetfulness by Alexandra Fuller 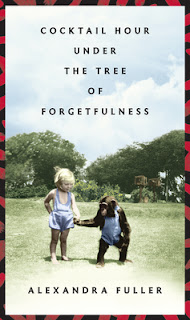 Rating: Loved, like I could elope with it loved!
Did I finish?: Yes, in a few nights.
One-sentence summary: A memoirist recounts her mother's life, from her Scottish roots to her childhood in '50s and '60s British-held Kenya and finally, her life in war-torn Rhodesia/Zimbabwe.
Reading Challenges: British Books

Do I like the cover?: I adore the cover. It's a picture of the author's mother with her childhood best friend, a chimp named Stephen Foster. It says everything about this book.

First line: Our Mum -- or Nicola Fuller of Central Africa, as she has on occasion preferred to introduce herself -- has wanted a writer in the family as long as either of us can remember, not only because she loves books and has therefore always wanted to appear in them (the way she likes large, expensive hats, and likes to appear in them) but also because she has always wanted to live a fabulously romantic life for which she needed a reasonably pliable witness as scribe.

Did... I love this book so much that I went out and got Fuller's first book before finishing this one?: YES! I love Fuller's warm sense of humor and wry perception -- she's another memoirist I wouldn't mind having as a friend!

Is... the title amazing?: YES. A real tree on her parents' farm, the Tree of Forgetfulness is where locals resolve conflicts, grievances, and problems. The author's parents have their drinks under the tree nightly, and reflect on their day.

Am... I glad I read this first rather than Don't Let's Go to the Dogs Tonight, which is the memoir of her childhood?: YES -- only because I felt deeply sympathetic toward Nicola Fuller, Alexandra's mother, in this book (but I'm sort of judging her a little as I read Alexandra's memoir).

Buy, Borrow, or Avoid?: Borrow for sure, buy if you can -- an engrossing, compelling read!

Why did I get this book?: I grew up on Out of Africa (the movie and the book) and love all things Kenyan, so it was a no brainer for me!

Review: I'm having such a difficult time writing this review even though I loved this book (or maybe as a result of loving it!).  As a memoir/biography, it had my favorite elements: compelling individuals, a wry writing style, and a tumultuous setting in a location and era I enjoy.

I found myself describing this to friends as a kind of apology to Fuller's mother, Nicola, for Don't Let's Go to the Dogs Tonight, Fuller's memoir of growing up in Rhodesia during the violent conflicts there.  What I've read so far of Don't Let's Go to the Dogs Tonight so far is honest (brutally, amusingly, depressingly) and unflinching, and Fuller's mother isn't the most sympathetic.  In this book, Fuller goes back to look at Nicola's childhood, her parents, her experience in Africa, her love for the land, and the impact of the violent losses in Nicola's life.

What I so appreciated about Fuller's writing was her balance of affection for her parents and an awareness of the implications of their choices.  She's no colonial apologist or 'when we' romanticizing the era of British control in Africa.  She writes about the violence of late 20th-century Kenya and Zimbabwe succinctly and in a way that felt fair and accurate, that acknowledged the pain and losses on both sides of the conflicts.

By the end of this book, I felt like I knew the Fullers a little.  I liked them (even if I think Nicola Fuller is probably more fun to read about than live with) and I am wholly an Alexandra Fuller fangirl.  This slender book packs a lot of punch and I can't recommend it enough.  Even if the setting or era is alien to you, give it a try as Fuller's writing sucks you in and makes you care. (Plus, included are extras to guide the reader: maps, a glossary, cast of characters, etc.)

(If you do end up reading this, you absolutely have to check out the photo album on Fuller's website after: it was a delight seeing more of the names and places that were familiar to me. I squealed at the sight of the orange Le Creuset pots on a window sill.)
* book reviews book rating - loved