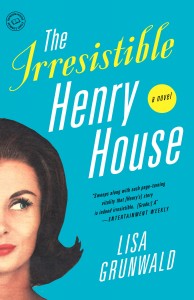 Rating: Liked it despite my initial resistance
Did I finish?: Yes -- once I started I had to finish!
One-sentence summary: The story of Henry House, a home economics 'practice baby', who struggles to learn what he wants and from whom, all the while navigating the changing landscapes of America in the '50s and '60s.
Reading Challenges: Historical Fiction

Do I like the cover?: Yes -- it's got the kitschy feel of the '50s and matches the hardcover version.

First line: By the time Henry House was four months old, a copy of his picture was being carried in the pocketbooks of seven different women, each of whom called him her son.

Was... the novel's real life inspiration one of the reasons I picked this up?: YES.  Grunwald even shares a snapshot that inspired the novel, from an archive at Cornell about practice babies.  Horrifying/fascinating!

Did... I totally fall for Henry's best friend Mary Jane?: YES.  I can't say why without spoiling the novel, but needless to say, she might be one of my favorite characters of 2011!

Did... I love the hilarious scene with Martha, the home ec teacher, and Dr Spock?: YES.  One of the few fiction-meets-real-world moments that delighted me!

Buy, Borrow, or Avoid?: Borrow for sure -- a fascinating read that I think would especially appeal to book clubs or anyone who digs the '50s and '60s.

Why did I get this book?: The '50s were weird and the weird things they did then fascinate/horrify me!

Review: Confession: I was a bit resistant to this book when I started it. I have little patience for damaged men and I wasn't sure I'd be interested in or care about Henry's emotional wounds.  An orphan baby lent out to a college's home economics program, Henry was raised by a series of practice mothers before being adopted by the head of the program, but as a result, he's irrevocably scarred.  As he grows up, he struggles to form and understand healthy relationships, opting instead for the pleasure of quick flings -- and succumbing to lure of the sex-drugs-and-rock-and-roll '60s.

Once I started this book, though, I couldn't stop.  Even though Henry was damaged goods, and I found him and his behavior so maddening, the story wasn't really about his behaving badly.  It was about his searching for and fleeing from unconditional love, an exploration of the real world impact of a child denied emotional attachment as an infant.

As a historical novel, this book was engrossing, especially the juxtaposition of the squeaky clean world of late '50s Disney with the gritty, grimy, hazy landscape of London in the '60s.  There were a few Forrest Gump-ish moments I could have lived without, but they were rare and I could speed past them easily.  Grunwald's writing is effortless and I adored her secondary and tertiary characters.  I found them as vibrant and real as Henry; in particular, his best friend Mary Jane might be one of my favorite of this year.  (I'd love a book all about her!)

The last chapter of this book changed my review from 'okay' to 'like' -- it's bittersweet and hopeful and moving, and I raced to the end, satisfied with the conclusion.  I think this would be another great book club read, or an unusual historical novel for anyone wanting a change of pace, or fans of Mary Poppins or Yellow Submarine (two projects Henry works on, and Grunwald's obvious research is fascinating).

I'm excited to offer a paperback copy of The Irresistible Henry House to one lucky reader. To enter, leave a comment on this review. Open to US/CA readers, closes 9/2.