The Lantern by Deborah Lawrenson 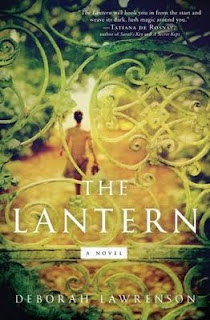 Rating: LOVED, like top 10 of 2011 l-o-v-e-d!
Did I finish?: Yes, another record read in 3ish hours.
One-sentence summary: One rambling house in Provence connects two women as both struggle with the secrets that permeate their lives.
Reading Challenges: British Books, Historical Fiction

Do I like the cover?: Yes -- it's so pretty and reminiscent of the architectural feel of the novel's setting.

First line: Some scents sparkle and then quickly disappear, like the effervescence of citrus zest or a bright note of mint.

Do... I wish I could live at Les Genévriers?: YES. Though falling apart, the hamlet seems to have this Anthropologie, French shabby chic thing going that I eat up with a spoon. I want!

Did... I love every character in this book?: YES. Even the unlikeable ones felt real, bursting from the pages, and I loved to love -- or loved to hate -- all of them.

Am... I searching for lavender scents now?: YES. One of the characters works harvesting lavender and the myriad of descriptions of the fragrance have me in the mood to wallow in the smell.

Why did I get this book?: Rebecca is one of my all-time favorite reads and when I saw this book being compared to Rebecca, I was intrigued. Plus, it's set in France and I can't say no to an armchair escape.

Review: Here's my advice: buy this book and then put aside a whole morning or afternoon to dive in because I promise you're not going to want to stop. Interruptions will be painful. (Have someone bring tea or wine, though, because the story begs for that.)

At first, I thought this was going to be a literal retelling of Rebecca. The heroine, a younger woman, has a whirlwind romance with a moody older man -- Dom -- who is tight-lipped about his charismatic first wife, Rachel. Like du Maurier's book, the heroine in The Lantern is unnamed (although Lawrenson kindly has Dom give her a nickname for us to use, 'Eve'). The Lantern even has the iconic 'Last night I dreamt I went to Manderley again' scene, when Eve dreams of Les Genévriers, the rambling hamlet she and Dom reside. Very quickly, though, it came clear that this novel is an homage to du Maurier's classic but still its own creature.

Alternating Eve's story is Bénédicte's, a woman who grew up at Les Genévriers during World War II and worked in the lavender fields and faced her own dark mystery. At first, I was impatient with the switching stories -- I just wanted to know what was going on with Dom -- but within two or three chapters, Bénédicte's story grabbed me as well. Her twisted, dangerous brother Pierre and her talented sister Marthe were as much a part of Les Genévriers and the story as the swimming pool and gorgeous countryside.

Eve had the right mix of naivete and obliviousness to make the story work realistically, without making me want to shake her for being a mouse (something I occasionally wanted to do to du Maurier's heroine). I greatly appreciated that Lawrenson didn't just wave away technology -- Eve does internet research, like an reasonably curious person would do -- and she gives Eve modern attitudes and behaviors. Eve confronts Dom in a way that du Maurier's heroine never could.

Lawrenson's writing style is lovely: evocative enough to give a strong sense of place but without too much ornamentation. The story races with impending danger even in the pensive places (although perhaps that was just me, unwilling to slow down!) and has the same sort of romantic gloominess of du Maurier's novel. Wisely, Lawrenson's novel is more than just what-happened-to-Dom's-wife -- du Maurier's novel set the bar so high I'm not sure any other book could do it well without seeming contrived -- and her mixing of historical mystery with a modern day Bluebeard is delightful.

Bottom line: get this book now (and thank me later!).

I'm thrilled to offer a copy of The Lantern to one reader. To enter, simply comment on this entry with an email address. Open to US/CA readers, ends 9/2. For another entry, be sure to come back for my interview with Deborah Lawrenson.
* book reviews book rating - loved