What Language Is by John McWhorter 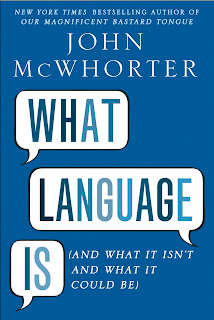 Title: What Language Is (And What It Isn’t and What It Could Be)
Author: John McWhorter

Rating: Okay to liked.
Did I finish?: I did!
One-sentence summary: A discussion of what makes a language a language (rather than a dialect or 'tongue'), and how languages change, shape, grow, and shrink over time.

Do I like the cover?: It's a bit boring, but the word balloons make it clear what the book is about.

First line: Page through a grand old book on what was once known as natural history -- as we all do so often, of course -- and you'll find that almost all drawings of marine life are rendered from the perspective of someone standing on the shore.

Buy, Borrow, or Avoid?: Borrow -- my mother was always big into me reading books that might challenge my brain a little and I still pick up something outside of my normal tastes now and then. This might be that kind of book if you like words or have struggled to learn a second language.

Review: I'm hardly a linguist by any stretch, but I'm chatty and I love trivia. As someone learning a second language as an adult, I'm interested in the ways languages have grown and changed.

The title -- and subtitle -- pretty succinctly summarizes the point of this book: what language is, isn't, and could be. Written for, I presume, an American audience (certainly an English-speaking audience), the book argues that 'normal' languages like English are in fact, not normal, and that many of the obscure, soon-to-be extinct languages spoken by small populations around the world are interesting, complicated, relevant, and evolved. More importantly, because a language isn't written doesn't mean it is less in value, importance, or sophistication.

I found this book a bit heavy at times, or more technical than I anticipated in a piece of popular non-fiction, but my wife found it very readable (but she also reads a lot of non-fiction). As the book progressed, I found it easier to understand -- either McWhorter's style grew less technical or I was starting to 'get' it.

Using 'idiom' as an acronym/frame, McWhorter's argument is that languages are ingrown, dissheveled, intricate, oral, and mixed.  Some of this went over my head (the entire chapter on languages being ingrown might as well have been written in, well, a foreign language!) but other chapters immediately made sense.  McWhorter helps by including charts and maps of the areas and languages he's referring to, which is immeasurably helpful.

McWhorter's writing, while very smart, also is humorous.  He's someone who clearly loves what he does, and he loves untangling linguistic mysteries.  Reading this was like hanging out with a very smart friend -- I might have gotten lost now and then, but ultimately, I enjoyed myself.

For more reviews, check out the other blogs on the tour!

I'm thrilled to offer a copy of What Language Is to one lucky reader. To enter, please fill out this brief form! Open to US/CA readers, closes 9/9.