September 21, 2011
Earlier this month I read and enjoyed Katherine Webb's novel The Legacy, a historical novel-contemporary mystery melange set in Oklahoma and the UK. It's a perfect beach-y read for the last days of summer.  I'm excited to share my interview with Ms. Webb, so read on to learn about her writing, her novel, and what she's been reading! 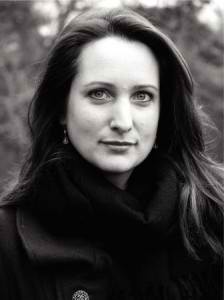 The very first I have no idea - my mother tells me I started writing stories when I was six or seven years old, often featuring a character called Crow, apparently; but I have no memory of them. I did start to write a novel in my teens - it was a fantasy story, deeply unoriginal, in which two characters falling in love brought warring races together. Thankfully, it's not saved anywhere!

No real rituals, but I have to have everything tidy and organised. I'm a real neat freak, so if the house is a mess or there's a pile of unanswered letters and bills on my desk, I can't settle down to work. I try to write at least 2000 words every time I sit down to it - sometimes that takes all day, sometimes it takes two hours and I carry on going... I also have to have my workbook full of notes and scribbles open next to me - even if I don't glance at it once or haven't written any notes for the part of the story I'm tackling. Without it, I feel rudderless! 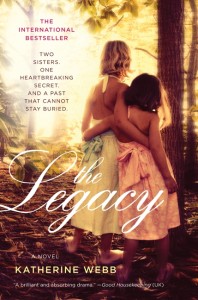 Was The Legacy the original title of your book?

No, the original title was 'Quietly Shining', which was taken from the Coleridge poem I used extracts of throughout the book. I thought it sounded mysterious, but the folk at Orion (my UK publishers) weren't so keen!

As you were writing The Legacy, was there a particular scene or character that surprised you?

I think Caroline probably surprised me the most. It's the terrible thing she does that poisons the lives of her whole family, after all, so I had originally intended her to be almost the villain of the piece; but when it came to writing her, she turned out to be far more complex than that. I started to feel sorry for her, for how unhappy she was and how she struggled with her new life and with her loss. In the end she only behaves as terribly as she does because she has been driven to the very edge of reason. I hope that readers will empathise with her, and see why she ends up the way she does, even if they can't forgive her!

I am always reading - I'm never 'between books' for more than a few hours when it comes to reading them! I love the countryside, so I go horse riding, walking and jogging (occasionally!). I love cooking, fixing up the house and generally nesting - especially now the weather's getting colder!

I've just started The Long Song by Andrea Levy and am loving it so far. I think it might be even better than her previous novel, Small Island. I also recently read The Book Thief by Marcus Zuzak - such a sad story, and told so originally. Speaking of sad - I also just finished The River by Tricia Wastvedt. It is beautifully written but tells such a tragic story that I had to bake a cake afterwards to cheer myself up!

My thanks to Ms. Webb for her time and thoughtful answers. You can find her on  Facebook. To see more reviews, check out the other blogs on the tour.