Last week I read Rosanne E. Lortz's hefty and promising Road from the West, the first in a trilogy set in the 11th century. I'm excited to share my interview with Ms. Lortz (she loves one of my all-time favorite historicals!) so read on to learn more about her, her writing, and what she's been reading.

I have to go way, way back for the first piece of fiction I remember writing. I think I was ten or eleven years old, and I took the fable of “The Boy Who Cried Wolf” and changed the characters into insects. There was a young ant in charge of taking the aphids out to pasture every day, and to cause a little excitement, he kept pretending that he had sighted the horrible ladybird beetle coming to devour the flock. Just like in the original story, when the ladybird beetle finally did arrive, no one would believe him and the aphids met a rather tragic end.

With ten-month-old twins keeping me busy, I have to seize the opportunity to write whenever it comes available. When the boys were first born, this sometimes meant writing at 3am in between feedings. Now that they’re a little older, it means writing during naptimes or when my husband is off of work and can help out with the kids. The one ritual I have--and it’s an essential one for me--is to set writing goals for myself and to log my progress. As unimaginative as it sounds, I’ve found that keeping a daily record of my word count motivates me more than anything else to make time for my writing. 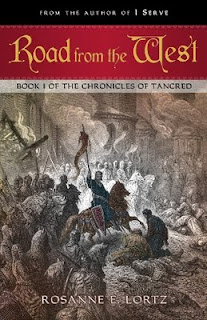 Was Road from the West the original title of your book?

To give the short answer: no. Originally, I intended to tell the whole story of the First Crusade in one book. But as my writing progressed, I realized I had far too large of an adventure to fit between the covers of a single book. I split my story outline into three volumes and decided to call the whole trilogy The Chronicles of Tancred. The first book, which follows Tancred’s journey from Italy to Antioch, received the title Road from the West since the Crusaders’ travel to the Holy Land is such a big part of its story.

As you were writing Road from the West, was there a particular scene or character that surprised you?

Yes, there definitely was. I didn’t set out to include Alexandra, the Greek girl from Bari who has a vendetta against Tancred, but once she forced her way into the story, she kept assuming more and more of a role. She ended up being one of the favorite characters of most of my beta readers and I have big plans for her in the next two books of the trilogy.

Have you had an opportunity to travel to any of the locations featured in this novel?

So far, the only place in the book I’ve been able to visit is Rome. I would love to be able to go to all the places in the book, especially the cities in the old Byzantine Empire. I think it can be helpful to do research on location, although with a story nearly a thousand years old, it’s good to keep in mind that the cities have changed significantly in the interim. A couple of my favorite primary sources have been travel journals by travelers from the twelfth century, and I’ve greatly benefited from their contemporary descriptions of cities like Constantinople, Antioch, and Jerusalem.

According to your website, you like classic historical fiction and some fabulous historical fantasy. If you could put one historical in everyone's hands, which would it be?

These kind of questions are so hard because they make you choose one favorite to the exclusion of all others.... One of the most amazing historical novels I’ve ever read is Katherine, by Anya Seton, and I would say it’s quintessential reading for all lovers of the historical fiction genre. The amount of historical detail, the depth of characterization, and the pacing of the plot are all beautifully done.

When I’m not writing, I love to play the piano, bake bread, waste time on Facebook, help out at a local school, and--of course--read, read, read.

My last three reads have all been excellent. Nemesis, by Lindsey Davis, is the last of twenty books in the Marcus Didius Falco series. Falco is a Roman “informer” (detective) with a flair for cheeky narrative and solving murder mysteries. Georgette Heyer’s Regency World, by Jennifer Kloester, is a nonfiction read, but still completely engrossing and so informative about the time period of Georgette Heyer’s and Jane Austen’s books. And last, but not least, I am just finishing up The Scarlet Lion, by Elizabeth Chadwick. It’s the second book in her William Marshal series and is turning out to be even better than the first one. 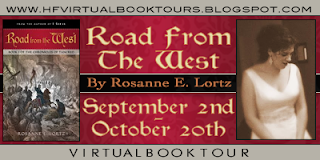 My thanks to Ms. Lortz for her time. Learn more about her and her books at her website. You can see more reviews by checking out the other blogs on the tour.

I'm thrilled to offer a copy of Road from the West to one lucky reader!