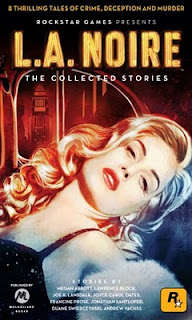 Do I like the cover?: Oh, I love it -- it has the glossy feel of the video game and the pulp-y sensibility of other novels from the era. Each story has it's own title art, as well, which was striking.

First line: Deep in the alley, lit by the beam of the patrolman's flashlight, she looked like a naked angel in midflight, sky-swimming toward a dark heaven. From "Naked Angel" by Joe R. Lansdale

Did... I actually read this on my phone?: YES. I'm not sure how it happened, but the three or four days I read this I left my reader at home, but had my Sony Reader app on my phone. Thankfully these was effortless to read on my phone -- the formatting was great so no weird characters or odd spacing.

Am... I tempted to find someone who has a game system and cajole them into borrowing the game so I can give it a try?: YES. If only for the pretty graphics.

Why did I get this book?: It's Noir -- plus the cover, and the authors.

Review: I was very dubious about this collection, which was released as part of a tie-in to a video game. I'm not a gamer but I do love noir, so I sprung for the e-book when I saw the authors featured (Megan Abbott, Lawrence Block, Joe R. Lansdale, Joyce Carol Oates, Francine Prose, Jonathan Santlofer, Duane Swierczynski and Andrew Vachss). At worst, I figured it would be a gathering of previous published work, some of which might be new to me. Thankfully, happily, entertained-for-three-nights-ly, I was wrong!

The stories are originals, contributed specifically to this collection, which is exciting. Two or three feature characters from the video game, but I didn't find that a hindrance in the slightest (in fact, I didn't notice save for the Introduction telling me which had 'em). I enjoyed most of the stories, but the standout winners for me were Lawrence Block's "See the Woman" and Duane Swierczynski's "Hell of an Affair". "Black Dahlia & White Rose" by Joyce Carol Oates felt done as did Francine Prose's "School for Murder", but I'm also not a huge fan of either writer, so that could be why I wasn't impressed. The rest of the stories were good -- high on ambiance, a hint of violence and sex, enough punch to stick with you for the day.

I don't think hardcore noir fans will love this collection, but there are one or two stories that I think stand out. Certainly, as an introduction to many of today's top crime and mystery writers, this is a good start. From what I understand, playing the video game doesn't spoil any of these stories (nor do they spoil the game's storyline) but it might enhance the gameplay for those who really enjoy the feel of the setting. For everyone else, if you want a little gritty 1940s L.A. in your day (and who doesn't?!), consider this as a quick pick-me-up on a grey evening or smoky morning.
* book reviews book rating - liked