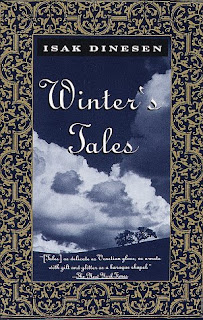 Rating: Liked.
Did I finish?: I did, over a week, about a story or two a night.
One-sentence summary: Twelve short stories on love, faith, courage, family, obligation, wonder, and death.

Do I like the cover?: I don't -- I know it matches the cover for Seven Gothic Tales, but I don't think it reflects the flavor or tone of the stories.

First line: In the first half of the last century there lived in Sealand, in Denmark, a family of cottagers and fishermen, who were called Plejelt after their native place, and who did not seem able to do well for themselves in any way. From "The Dreaming Child"

Buy, Borrow, or Avoid?: Borrow or buy: there's some lovely, poetic language in these stories for those who are in love with gorgeous quotes.

Why did I get this book?: My GoodReads book group picked it and I'm always willing to read Dinesen.

Review: Like many Americans (I suspect), my introduction to Isak Dinesen was via the film version of Out of Africa. I actually never saw it until an adult, but my mother bought the film tie-in copy of Out of Africa and Shadows On the Grass which I read cover to cover two or three times in high school -- and my Dinesen obsession was born.

This collection of eleven short stories has the feel of a 19th-century fairy tale collection; while reading, I found myself musing if these stories were the ones Karen recounted to Denys while they were in Kenya. Some were pure magic while others were meditations on religion, family, or obligation. There were delightful passages in every story, wryly funny and very true, such as:

"Jensine would never have married a man whom she did not love; she held the god of love in great respect, and had already for some years sent a little daily prayer to him: "Why doest thou tarry?" But now she reflected that he had perhaps granted her prayer with vengeance, and that her books had given her but little information as to the real nature of love." (page 109, from "The Pearls")

For those who are new to Dinesen, this is an excellent introduction as she is a writer of more than just memoir; those who have read Out of Africa have gotten a taste of the dreamy, meditative way she tackles life, and these stories are an extension of that.
* book reviews book rating - liked