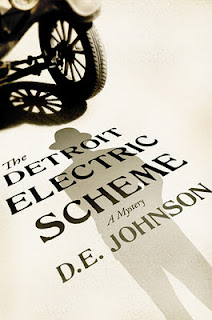 Rating: Liked.
Did I finish?: I did!
One-sentence summary: In early 20th century Detroit, automobile heir Will Anderson finds himself framed for the murder of his best friend -- who happens to be his ex-fiancée's new fiancé -- and he races to clear his name and solve the murder.
Reading Challenges: Historical Fiction

First line: The first part of the body I saw was half of the left arm.

Did... I spend a ton of time researching the cars and fashions mentioned in this novel?: YES. Especially with the cars -- I know nothing about automobiles, especially early ones, so it was fascinating to see the models referenced. The author has a webpage with images that match scenes from the book, including pictures of the cars.

Buy, Borrow, or Avoid?: Borrow -- although the murder is grisly, the novel isn't gross or unnecessarily gory, and I think historical fiction fans and mystery addicts will enjoy this story because of the unique setting.

Why did I get this book?: I'm part of the tour to review the sequel Motor City Shakedown (don't read the description, by the way, unless you're not going to read this first book as it spoils the whole end of book one!) and I can't resist anything gritty, murderous, or set in the early 1900s. Yum!

Review: Detroit's been floating around the back of mind recently thanks to the rather fabulous Chrysler ads that feature the gorgeous, gritty architecture and landscape of the city once called the Paris of the Midwest.  When a tour opened for a mystery novel set in 1911 in the Motor City (this book's sequel), I couldn't resist, and being a stickler about reading things in order, I grabbed this book first so I could be good and immersed.

Set November of 1910, the novel opens with a grisly murder.  Told by Will Anderson, son of a successful electric automobile manufacturer who has some demons and a drinking problem, we quickly learn the victim was John Cooper, a friend Will's from college who was engaged to the woman who, until recently, was engaged to Will. Understandably, everyone assumes the worst, and we follow Will as he tries to keep out of jail and solve the crime without more people losing their lives.

This book caused much contention in my house, as my wife and I both read it and had very different opinions upon finishing. (She disliked, I enjoyed.) I loved the setting and the ambiance of the story and Johnson throws in fabulous historical details that made the nerd in me die of glee. The mystery was straight-forward but engrossing, and I liked all the characters. My only complaint really is that I wish the book were longer: at times, the story felt rushed or the characters kind of thin. With a few more pages, things might have been fleshed out more satisfyingly.

A solid start to a great historical crime series that is perfect for those who like seasons to match their reading. The grim winter in this novel felt pretty real with the miserable rain we've had in Boston recently!
* book reviews book rating - liked