Yikes! I haven't dredged up that memory for quite a while, and with good reason. The novel was an historical police procedural set in Dallas during the Prohibition, and featured a wise Marine veteran turned cop named Pappy and his new partner Joe. Pappy? What was I thinking? I do recall that I was really enamored with that name for my character at the time. The plot was so memorable that I've nearly forgotten it, but I do remember that it involved a rum-runner, his cheating wife, and a wicked father-in-law who had sex with the maid. I've no idea how I got from Pappy to India.

I try to do 2,000 words per day, and I usually write in the afternoon, from about 1:00 to 5:00. I'd prefer to write in the morning, but I start each day at the gym, and then 3 days out of the week I'm either busy running errands and having lunch with Mom or taking the dog for a run in the woods. I sit in a recliner I bought for my study and work on my laptop. I always have a bottle of water nearby, and at 3:30, without fail, I have a protein bar. Gosh, you're thinking. Could her life be any more exciting? 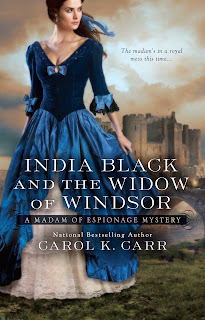 Was India Black and the Widow of Windsor the original title of your book?

Yes. When I started writing this series, I was very taken with the idea of naming each book "India Black and the _______." In retrospect, I should probably have just gone with shorter titles.

As you were writing India Black and the Widow of Windsor, was there a particular scene or character that surprised you?

I work from a detailed outline and so I have formed a mental image of each scene in the book before I start writing. There weren't any surprises in the "Widow of Windsor," but that's due in part to several of the characters (Queen Victoria, John Brown, Benjamin Disraeli) being historical figures with well-documented eccentricities that required very little creative input from me. I'm at work on the third India at the moment, however, and there's a character in this ms who just will not behave as I expect him to. I've finally capitulated and allowed him to be the character he wants to be, which required some changes elsewhere in the novel.

Is there anything that you do/read/listen to/etc. that particularly reminds you of India and puts you in her head?

I can conjure up India very easily. Her voice comes to me quite naturally. I actually have a harder time keeping a lid on her. I often find myself editing some of her remarks for fear they'd make her sound downright mean. A little snarkiness goes a long way, and I do want her to expose a vulnerability occasionally.

Read, read, and read some more. That's always first on the list. I'm working on my family history. I've become a dedicated gym rat in the last year. I like to golf. I watch a lot of sports. I love music (classical, and classic jazz from the 30's to the 60's). In fact, I have too many hobbies.

I've discoverd Nicolas Kilmer's art mysteries. His protagonist, Fred Taylor, is terrific. I read a lot of vintage mysteries, and usually have one of those on the go. Right now it's The Plague Court Murders by John Dickson Carr, master of the locked room mystery.

Thanks for inviting me to your blog, Audra, and sharing something of India with your readers.

My thanks to Carol for her time and thoughtful answers. To learn more about her and her books, check out her website and Facebook.

I'm thrilled to be able to offer a copy of India Black and the Widow of Windsor to one lucky reader! To enter, fill out this simple form. Open to US/CA readers, closes 10/21.
* interviews