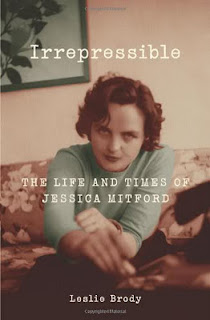 Rating: Loved!
Did I finish?: I tore through this book.
One-sentence summary: Well-written biography of muckraker Jessica Mitford.

First line: Soon after Jessica Mitford moved with her family to Swinbrook House in Oxfordshire, she began to plot her escape from it.

Buy, Borrow, or Avoid?: Buy -- I'm telling you, you want to know about the fabulous Decca Mitford!

Why did I get this book?: I love the Mitfords, and I love muckrakers, and I love female journalists. I couldn't resist.

Review: In a high school journalism class, I read some excerpts from Jessica Mitford's amazing book The American Way of Death, an expose and exploration of the American funeral business (her book was said to have influenced Robert F. Kennedy's coffin choice for his brother). It was much later that I learned this Mitford was related to that other Mitford I knew, Nancy.

Born in 1917, Jessica was the sixth of seven children born to an English baron and his wife. Jessica's childhood was influenced by the privilege of her family's wealth, status, and name as well as the wildly diverging personalities of her sisters. All were passionate and brilliant, determined to mark their place in society; Jessica's early liberal political leanings were in stark contrast to her sisters Unity and Diana, who were dedicated Fascists and supporters of Hitler. An impetuous elopement with her second cousin lead to Jessica being cut out of the family. After her first marriage ended, she married an American and became a Communist. She actively worked in the Civil Rights movement and wrote sharp, invective examinations of American society.

At less than 350 pages, this biography reads quickly albeit a tad dry. I tend to favor more 'relational' biographies, the ones where the biographer openly acknowledges her place in the story, but this is one of those more formal types where the biographer is invisible. As a result, the writing style is very precise, very sharp, almost journalistic in style. Many sentences are shaped by a direct quote of some sort (i.e., Decca reveled in being "busy, busy, busy.", page 135) but that isn't to say that Brody doesn't write well or without passion (Suddenly, they were in a psychosexual crucible, with all the vino and cheap gin they could drink. He had a bitter edge. She had a wicked mouth. Finally, they were just kids., page 19). Mitford's life -- already fascinating -- snaps along in Brody's hands, one fascinating episode after another, and so this felt like a considerably shorter book.

Even if you're unfamiliar with Jessica Mitford, give this book a try: she's a fascinating women whose life reads like an over-the-top historical novel. I think anyone interested in post-WWII Britain and America will enjoy following this radical and brilliant writer through some of the most influential events in 20th century history.

I'm thrilled to offer a copy of Irrepressible to one lucky reader! To enter, fill out this short form. Open to US/CA readers, closes 11/11.