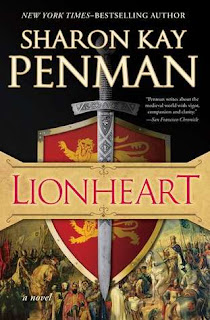 Rating: Liked
Did I finish?: I did!
One-sentence summary: Detailed, deft novel following Richard the Lionheart and his contemporaries
Reading Challenges: Historical Fiction

Do I like the cover?: I don't hate it, although I find it a bit boring. It sort of reminds me of a movie poster (I keep looking for an actor's face behind the sword and shield) but it conveys the militaristic bent to the novel.

First line: Theirs was a story that would rival the legend of King Arthur and Guinevere, his faithless queen.

Do... I love the way Penman writes about her subjects?: YES. Actually, I love the way Penman writes as an author -- she's responsive to her readers and quite devoted to keeping them happy -- and her 'Message from the Author' on Lionheart references Johnny Cash (yay!). She's someone who clearly sees and feels her historical characters as vibrant, real people, and I appreciate that.

Did... I get a hot little crush on Joanna, Richard's fascinating sister?: YES. I want a whole about about her, please!

Do... I strongly recommend Penman's blog?: YES. This might be one of my favorite author blogs -- as I keep saying, I'm wild about Penman's passion for her subjects and her craft, and I so enjoy reading her thoughts about her research and subjects.

Buy, Borrow, or Avoid?: Buy, especially if you're a historical fiction fan. You won't want to return this book to the library unfinished, and the size might make it hard to some to finish before the book is due back. Still, it's worth having -- I bet a reread would warrant more enjoyment!

Why did I get this book?: I love historical fiction, and I've always rather liked Richard from his role in some of the Robin Hood myths. I've always meant to read Penman's novels, so this seemed a perfect start!

Review: Sharon Kay Penman is a giant of historical fiction, recognized for her historical detail and vibrant characters. Shamefully, despite being a hist fic addict, I've never read her, so I jumped at the chance to review this book.

The novel opens with full-on drama, featuring Richard's sister Joanna and a young girl who will become her serving woman. This opening, with a lovely mix of rich historical detail and drama, immediately drew me in and I was excited to see where this 600 page novel would take me. Following Richard the Lionheart's crusade to Jerusalem, the novel covers 1189-1192, an era which, I'll be honest, is a bit fuzzy for me in terms of costuming and manners and real life, so I was relieved to find Penman's story didn't feel excessively teach-y.

According to Penman's website, Lionheart is part of her Henry II trilogy (despite being the fourth book). I haven't read the previous three books and I don't think one needs to have read them to enjoy this one. She provides enough back story to set up this novel and characters so that I never felt confused by what had happened before; whatever confusion I had was simply an unfamiliarity with the historical figures (and ohemgee, there are a million). I suppose that would be my only complaint about this novel: the enormous cast. Although three pages of characters are provided at the beginning of the book, I had to take my own notes to keep everyone straight and I didn't feel like I really got to know anyone well. I wanted especially more about the women in Richard's life -- they were fascinating people -- but to be honest, I can't say I really got to know Richard. I followed him, but I didn't know him.

Still, this is a staggering novel that covers a fascinating era. Readers who like their hist fic to focus on the history (and not, say, the sex) will love this one as it's low on salacious detail without minimizing the relationships -- romantic or otherwise. Settle in, though, if you pick this up: it's not a fast read but it is engrossing!
* book reviews book rating - liked