A Different Sky by Meira Chand 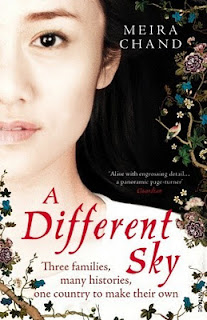 Rating: Liked.
Did I finish?: I did -- took some time, but it was worth it!
One-sentence summary: A detailed look at life in Singapore, from the late 1920s through the 1940s, through the viewpoints of three very different Singaporeans.
Reading Challenges: Historical Fiction, South Asian

Do I like the cover?: Eh -- it's okay. I would have preferred a black and white photo of Singapore, perhaps, something that better represented the place of the story rather than one of the characters.

First line: On the journey they spoke about the island, a pinprick on the great body of Asia.

Buy, Borrow, or Avoid?: Borrow -- but immediately start reading because you'll need some time to dig in!

Why did I get this book?: I never say no to historical fiction and I was intrigued by the WWII setting.

Review: This is the kind of historical fiction that educates, effortlessly. Set in Singapore, spanning 1927 through 1946, this novel was a unique read for me in that it covered an era I love in a setting wholly unfamiliar to me. Chand's characters aren't royalty or society elite but every day people caught up in a changing landscape; real historical moments meet the every day.

Chand's focus in this novel is on three primary groups in Singapore: the Eurasians -- Howard Burns, his mother, and his sister, local citizens of indigenous and European descent, viewed by the white Europeans as only a step above 'natives'; the transplanted Indians -- Raj Sherma, who migrated to Singapore for economic independence and ends up embroiled with the Japanese by a twist of fate; and the Chinese -- Mei Lan, a smart young woman whose family straddles modern European ideas and traditional Chinese culture and is caught, herself, between accepting her family's wishes and starting off on her own.

In almost any novel, the lives of women interest me most, so I was unsurprised to find that Mei Lan's story grabbed me immediately. However, Chand's detailed plotting, character development, and nuanced study of race, class, and education sucked me and I ended up caring deeply for both Raj and Howard as well. Even though I think the jacket blurb tries to imply a love triangle, this isn't just a historical romance set up in an exotic locale. This is really a novel about Singapore and the occupation of the land, first by the British and then by the Japanese. Identity and alliance is intrinsic to the story. Howard's mother, Rose, perceives the European disdain for Eurasions to be right and appropriate while Howard chafes at the implication. Raj struggles to rectify his experiences with the Japanese -- every one he's met has mentored and educated him -- with the virulent anti-Japanese sentiment in Singapore. Both Howard and Raj are captivated by Gandhi's anti-colonial revolutionary actions in India, but are split as to whether Singapore should take up the movement. Mei Lan is desirous of the university education her brother is given, but feels committed to her Chinese identity especially when news of Japanese brutalities in China reach Singapore.

Like Nevil Shute's A Town Like Alice, this book covers the before, during, and after of occupation, and I appreciated Chand's ability to offer the spectrum of emotional responses. My only complaint is that despite the novel's length (483 pages), some moments felt thin and underdeveloped. Enormous events are skipped over, casually alluded to, and years pass with only a vague comment. The dips in and out of the lives of the secondary characters was both enjoyable and maddening: I loved the additional facets through which the story was told but I was frustrated by the lack of development and resolution with them, as they were as compelling as the leads.

This was my first Meira Chand novel but I'm absolutely going to look for the rest of her books: this was a meaty, engrossing, sink-your-teeth-into historical novel that will stay with me. I'm haunted by the characters and I wish I could follow them another twenty years.

I'm thrilled to offer my gently used copy of A Different Sky to one lucky reader! To enter, fill out this brief form. Open to US/CA readers (international readers, if you're willing to split the shipping, I'd be happy to send to you if you win!) Ends 12/16.
* book reviews * giveaways book rating - liked