Jane Austen Made Me Do It edited by Laurel Ann Nattress 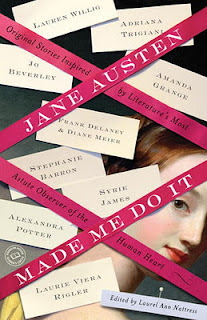 Title: Jane Austen Made Me Do It: Original Stories Inspired by Literature's Most Astute Observer of the Human Heart
Author: Laurel Ann Nattress, editor

Do I like the cover?: I do -- it's bold albeit a bit pink (but since I like pink that works for me) -- I appreciate the lack of curlique-ish font.

First line: A wedding must always be an occasion for joy, except when the husband is unwise enough to come under his wife's influence. from “Nothing Less Than Fairy-land,” by Monica Fairview

Buy, Borrow, or Avoid?: Borrow or buy, depending on your passion for Austen-inspired fiction. The big names in this volume make it a keeper!

Why did I get this book?: I love Austen sequels.

Review: I hate to admit this, but Pride and Prejudice is possibly my least favorite Austen novel. Terrible but true. (I'm a Persuasion and Sense and Sensibility fangirl all the way.) I say this to explain that I don't have any deep emotional attachment to Elizabeth and Darcy, which is why I love P&P inspired sequels and re-imaginings.

Purists looking for another Austen won't find that in this collection of twenty-two short stories, but for those who want to revisit Austen's literary worlds with others who are as giddy, swoony, and charmed by Austen will find this nearly 450-page book satisfying. The stories range from sequels of Austen's novels and parallel retellings (P&P from Lydia Bennett's viewpoint, for example) to contemporary retellings emulating Austen's plots, as well as original works that involve, usually, a devoted Austen fan learning an important lesson on love. Only seven of the stories were oriented around P&P nearly all of Austen's novels are featured. I was surprised to find so many stories inspired by Austen's relatives in this collection: her brother, Francis Austen and two featuring her nieces. One of the stories included has a real life happily-ever-after: Brenna Aubrey's "The Love Letter" was selected from eighty-eight submissions to be included in this volume in an open short story contest. To be published alongside Lauren Willig, Syrie James, Adriana Trigiani, and Stephanie Barron (among others), is a huge treat for a first-time author, and the added sweetness of the story's birth made me enjoy it all the more!

My own tastes tend toward Austen sequels rather than tales of modern day Janeites, so I was surprised to find that my two favorite stories in this collection were contemporary ones. “Faux Jane,” by F. J. Meier (Frank Delaney & Diane Meier) features Nicola and Charles Scott (who reminded me a bit of Hammett's Nick and Nora, actually), two frenetic, pretentious, educated, ludicrous and hilarious New Yorkers who decide to step in when Nicola's friend purchases a signed first edition of P&P. “What Would Austen Do?,” by Jane Rubino and Caitlen Rubino-Bradway, features teenaged James Austen (whose mother may or may not have married his father solely for his surname) who signs up for a country dance class and discovers what's likeable about Austen's novels. Having enjoyed one of Janet Mullany's (non-Austen) novels earlier this year, I was unsurprised to discover I got a kick out of her story, “Jane Austen, Yeah, Yeah, Yeah!". Set in 1964 at a girl's school in England, Mullany's story mixes Beatles-mania and Austen with charming results.

Whether you're new to Austen sequels, spin-offs, and other Austenesque reveries or already a fan, give this volume a try: there's a wide range of styles and stories featured, and the authors in this volume are the best out there. Wildly diverting, a little irreverent, but wholly devoted to Austen, this collection was a wonderful treat when my days were aggravating, unromantic, and I was in need of a escape that was new and familiar.

I'm thrilled to offer a copy of Jane Austen Made Me Do It to one lucky reader! To enter, fill out this brief form. Open to US/CA readers, closes 11/18. Be sure to return on Wednesday for my interview with Laurel Ann Nattress.
* book reviews * giveaways book rating - liked