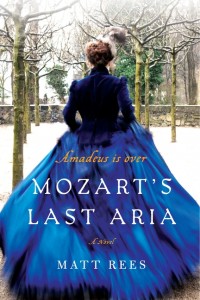 Rating: Okay.
Did I finish?: I did.
One-sentence summary: Mozart's sister travels to Vienna after her brother's unexpected death to discover his final work might have stirred up danger and caused his demise.
Reading Challenges: Historical Fiction

Do I like the cover?: I do -- it's super pretty but is completely not relevant to the book!

First line: When she sang, it was hard to imagine death was so near.

Did... I immediately zip to YouTube to find all the music referenced in this novel?: YES. Especially since Rees makes it clear the story arc was influenced by a specific piano sonata, I had to listen to see if it echoed the novel's feel.

Buy, Borrow, or Avoid?: Borrow if you like Dan Brown-ish thrillers.

Why did I get this book?: Historical novels always intrigue me but I was especially taken with the setting and premise of this one.

Review: Even though this book has elements that I just eat up -- a take-charge heroine, unique foreign setting, weird conspiracy involving a secret society, dramatic artists, and lots of intrigue -- I actually found this to be an unremarkable novel. The book isn't bad -- it's just rather pedestrian. At 295 pages, it ought to be a fast read but weirdly, the story drags despite the non-stop action.

The novel is written in the first person which is normally a voice I rather like -- I enjoy 'being' the heroine -- but in this case, I felt as if it were the 'easy' choice. Lots of telling the reader how the heroine felt rather than demonstrating, and that always bores me. (For example, there are two pages of the heroine looking at herself in the mirror near the start of the novel so we would learn of her appearance -- which is a tried and true trick of first person narrators in YA novels. I don't care how my heroine looks; I care about how she acts.)

It's obvious when reading the Author's Note and the mini-essay about the novel that Rees admires Mozart immensely and was greatly inspired by Vienna. That comes across in this novel but not much else. For a heroine who should be so interesting -- a child prodigy with great musical talents herself, married to a provincial widower and estranged from her brother in his last years -- Nannerl was remarkably flat.

The setting of the novel is a conspiracy around Mozart's sudden death, which is a historical event I've been fascinated with since I was a kid. As such, Mozart's music is a huge part of the novel, and in particular his opera Die Zauberflöte (The Magic Flute).

It's tricky when a novel features an artistic medium that readers might not be familiar with -- ballet or modern art or classical music -- and it takes real skill to make the experience of that medium, however foreign, something that readers can relate with and appreciate (Evan Fallenberg's When We Danced on Water made the passion of ballet very real for me, for example). Unfortunately, I don't think Rees quite conveyed why Mozart was such a genius or why his music was so moving (other than extolling us to find his music and listen along). I've had the good fortune of seeing Die Zauberflöte twice in the last handful of years with opera nuts who pointed out much of the Masonic influence that Rees mentions in this novel, and as a result, I felt comfortable with that aspect of the story: the characters, the visual clues, the possible political references. But I think those who aren't as familiar with the opera might be lost, especially since Rees continually tells us how greatly Mozart's music impacts everyone but doesn't translate that into an experience the reader can enjoy, too.

The book is loaded with extras: a map of Vienna, cast of characters, a list of music referenced in each chapter, an essay from the author on the inspiration for the story (and the hint that he wrote the novel emulating the form and feel of one of Mozart's darker piano sonatas), and suggested additional reading. Certainly, this novel inspired in me an interest to learn more about Mozart's sister but I can't say I understand more about Mozart or even 18th century Vienna. I think if you go into this with YouTube queued up and the expectation that you're getting a fast historical thriller, the experience will be diverting, a splashy read for the holidays.

I'm thrilled to offer a copy of Mozart's Last Aria to one lucky reader! To enter, fill out the brief form. Open to US/CA readers, ends 12/2.