From the Memoirs of a Non-Enemy Combatant by Alex Gilvarry 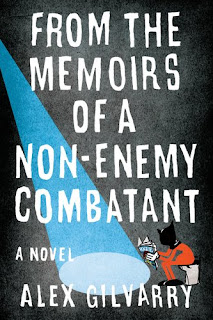 Title: From the Memoirs of a Non-Enemy Combatant
Author: Alex Gilvarry

Rating: Liked a great deal!
Did I finish?: Raced through it, howling!
One-sentence summary: Filipino fashion designer, Boyet Hernandez, finds himself embroiled in the War on Terror and imprisoned at Guantanamo Bay after he accepts funding for his fashion line from the wrong man.

Do I like the cover?: I do -- it fits the feel of the novel -- playful and pointed in equal parts.

First line: I would not, could not, nor did I ever raise a hand in anger against America.

Buy, Borrow, or Avoid?: Borrow or buy -- this is edgy, ludicrous, pointed, and funny!

Why did I get this book?: I haven't read a great deal of post-9/11 fiction and the absurd premise really attracted me.

Review: You're never going to believe what I'm about to tell you: this is a hysterical novel that combines fashion and politics. And it works!

Filipino fashion designer Boyet Hernandez moves to New York City in hopes of achieving his dream -- a haute couture fashion line -- and gets funding (reluctantly) from his blowhard neighbor Ahmed Qureshi. Boy is preoccupied with creating his line and getting his name out in the fashion world by doing styling, and he's happy to tune out Ahmed's bizarre behavior and exaggerations. But it's his association with Ahmed that leads to his imprisonment at Guantanamo Bay, accused of being part of a terrorist cell.

The novel is Boy's confession, written while he's imprisoned at Gitmo. An argument to his captors of his innocence, Boy explains how he became embroiled with Ahmed but his story is filled with sidelong explanations of fashion, his romances, and his relationship with his guards at Gitmo. The narrative is annotated by a fashion writer, Gil Johannessen, who covered Boy's rise and fall in the New York scene.

Gilvarry's writing is playful, flamboyant, pointed, wry, and sharp. Funny, but also discomforting. I've read a few reviews that criticize the flimsy female characters -- which normally would be a complaint of mine -- but in this case, the story is told from Boy's viewpoint, and it doesn't bother me that he can't quite put his finger on the women in his life. He's more preoccupied with his own trials and tribulations (and this is before he ends up at Gitmo).

The novel is funny, absurdly at times, but the ending is...bitter(sweet?) in a way, that made the story poignant and painful. I finished this book unwilling to pick up another, wanting to linger with Boy's story and Gilvarry's fabulous writing. I can't wait for his future works -- this debut is a silly, uncomfortable read. Recommended!

I'm thrilled to be able to offer a copy of From the Memoirs of a Non-Enemy Combatant to one lucky reader thanks to the publisher! To enter, fill out this brief form. Open to US/CA readers, ends 2/17.
* book reviews * giveaways book rating - liked