At the Mercy of the Queen by Anne Clinard Barnhill 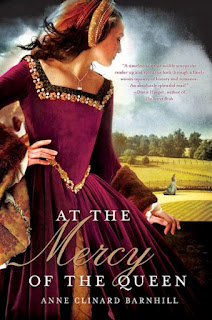 Title: At the Mercy of the Queen: A Novel of Anne Boleyn
Author: Anne Clinard Barnhill

Rating: Okay.
Did I finish?: I did -- this reads quickly!
One-sentence summary: Young Madge Shelton is brought to the glittering court of Anne Boleyn, where she finds love, lust, and court intrigue in spades.
Reading Challenges: A to Z Reading Challenge, Historical Fiction

Do I like the cover?: I don't hate it -- I think the cover model looks a bit like Natalie Portman, which is kind of distracting.

Why did I get this book?: I was intrigued by the familiar Tudor tale seen through the eyes of a lesser known cousin.

Review: Despite my love of hist fic, the Tudors are among my least favorite which is sad since there's a glut of novels on them. However, I'm not opposed to the setting and so when I learned about Anne Clinard Barnhill's novel featuring Anne Boleyn's cousin, I was curious.

Barnhill's premise is that Margaret "Madge" Shelton, cousin of Anne Boleyn, is brought to court as one of Anne's ladies. In the course of her time there she's wooed and wowed and seduced -- and pimped out to the king by her own cousin. I confess, it was that set up that most intrigued me: how do you make such an unsavory story human, real, and the players appealing? I love novels that explore the lives of women, especially in settings like this, where power is tenuous and dependent on, essentially, bartering one's body.

For the most part, this novel works in that regard: Barnhill presents the mix of assumed piety and open sexuality that made up Henry and Anne's court. Her portrayal of Anne Boleyn, as seen through her cousin's eyes, felt real although I found Madge, our heroine, to be a bit too perfect and guileless and pretty.

Barnhill uses dialogue primarily to provide back story and context, so for a good portion of the beginning, we're subjected to awkward lectures and weird speeches to set up the novel. That would be my biggest complaint -- the writing style -- but it grew on me as the story progressed and less explanatory exposition was needed. This volume has great extras to help the reader along (like a timeline, background on Margaret Shelton, and recommended reading) although I would have loved a who's who since I always mix up courtiers and cousins and mistresses.

This would be a great historical novel for someone new to the Tudors or someone who doesn't care much for dates and battles and minute court intrigue. Ultimately, this is a coming of a story during a tumultuous time when a woman at court had to be modest and knowing, when a kiss could make or break one's reputation. Barnhill's focus is on a young woman trying to find her footing in such a world, and its an inviting debut. 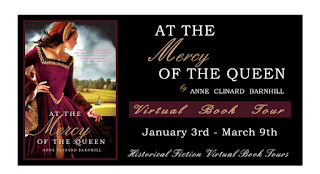 I'm thrilled to be able to offer a copy of At the Mercy of the Queen to one lucky reader! To enter, fill out this brief form. Open to US/CA readers, ends 3/2.