The Baker’s Daughter by Sarah McCoy 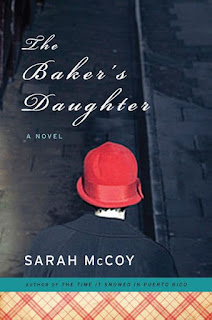 Rating: Okay to liked.
Did I finish?: I did -- I was halfway through this book without realizing it -- it reads very fast!
One-sentence summary: Parallel stories of two women facing their own grey areas in life -- Elsie, a German woman during WWII, and Reba, a contemporary American woman dating a Border Patrol agent.
Reading Challenges: Historical Fiction, Immigrant Stories

Do I like the cover?: I do! I don't think it has anything to do with the story at all, but it's wicked pretty!

First line: Long after the downstairs oven had cooled to the touch and the upstairs had grown warm with bodies cocooned in cotton sheets, she slipped her feet from beneath the thin coverlet and quietly made her way through the darkness, neglecting her slippers for fear that their clip might wake her sleeping husband.

Buy, Borrow, or Avoid?: Borrow for sure -- this would be a great novel for book clubs as there are so many facets that beg exploration and discussion.

Why did I get this book?: The pretty cover!

Review: I started this book and felt a bit stony about the story: the writing felt kind of casually journalistic, like an A&E piece in a local paper, and rather snobbily I thought this might be a topical, fluffy read. After picking up the book yesterday morning in bed, I had my nose in it on my walk to the subway, and I settled in once seated on the train. When my commute ended, I was irritated at having to put my book away -- and stunned to see I had raced through more than half the book. What I initially wrote off as something simplistic turned out to be an engrossing, engaging, and moving exploration of love, family, obligation, and the terrible grey area we live in.

Modern-day Reba, a reporter with emotional damage and an eating disorder, interviews a German baker on Christmas traditions. The German baker, Elsie, remembers only the Christmas in 1944 when she went to a Nazi party, got engaged to an SS officer, and tried to leverage that power to help a few people she could. Reba is engaged to a by-the-book Border Patrol Agent whose feelings on immigration are shifting and changing as he continues to face the reality of the immigration crisis in the US.

I definitely expected some simplistic acknowledgement of the gray areas in history -- not every German was a Nazi, not every undocumented immigrant is a criminal -- but McCoy's story tackles more than that. Without getting pedantic or uncomfortably political, her characters wade through intense emotional challenges that would best anyone, and as I was reading, I found myself empathizing with just about everyone. There were no handy villains to hate on; the world Elsie and Reba live in is sticky, and I so appreciated McCoy's articulation of that. All the secondary characters were vivid, which made me care so much more, as I was as invested in them as Elsie and Reba were.

The book closes with recipes, the ones featured in the narrative, which is wonderful because ohemgee, the food descriptions made my mouth water. I raided my local Danish bakery at one point because I was, like Reba, absolutely craving the baked goods.

This would make a great book club pick -- so many facets to invite conversation and discussion -- and it would make a good gift for someone who isn't sure they like historical fiction. This is an easy novel to read despite the complicated story and I have to applaud McCoy for presenting these stories in a human way.
* book reviews book rating - okay