The Garden Intrigue by Lauren Willig 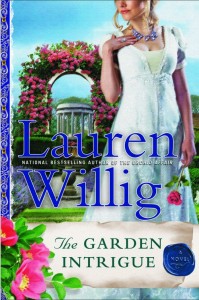 Rating: Really, really liked!
Did I finish?: I did, super fast.
One-sentence summary: British spies in Napoleonic France, a contemporary American historian struggling with love and vocation, and a mysterious invention that might change history all come together in this breezy novel.
Reading Challenges: Historical Fiction

Do I like the cover?: I loathe it. Other books in the series featured art but these newer ones have the awkward, headless model thing going and this weird grocery store romance cover vibe.

Do... I absolutely adore Lauren Willig's website?: YES. A section detailing the artist and painting title of her book covers (thank you!), detailed bibliographies for each book, a suggested reading order for the contemporary and historical storylines, there's a wealth of delicious extras available to her readers.

Did... I have another night or two of late-night snickering while reading?: YES. Which was especially cruel since my wife and I have both been afflicted with this hideous plague and are in desperate need of sleep. I just dosed my wife up on cold medicine, though, and she stopped noticing my laughter!

Did... I enjoy the references to specific places in Harvard Square?: YES. I even get my baked goods at the same market Eloise does!

Buy, Borrow, or Avoid?: Borrow for sure, but be prepared to want to go back and start the whole series!

Why did I get this book?: I've heard nothing but praise for this series and have been dying to give it a try.

Review: It's been impossible not to hear all the raves for Lauren Willig's Pink Carnation series, but I've somehow never gotten around to starting it, despite all the promise. Featuring a Harvard-educated heroine who researches Regency-era spies, the series seems a bit like chick-lit-meets-hist-fic in the best way.

And now, I understand why people are so enamored of this series: it's cute, breezy, easy, and diverting. Corset-clad beach read. (Shift-clad beach read? I'm shaky on my Regency undergarments. You get my quip, right??) Despite this being the 9th book in the series, I didn't feel like I was stepping into a story midway. I think the contemporary heroine and the Pink Carnation are two characters common to the series; the rest, I couldn't say. Regardless, Willig immediately pulled me in to story with her clever, bantering main characters and yummy mix of history and romance.

The setting is France, just as Napoleon has declared himself emperor, and the place is thick with British spies (under various covers) and American ex-pats and ambassadors. There are echoes of Much Ado About Nothing in the story, from the contemporary plot line -- where a version is being filmed -- to the Beatrice-and-Benedick-ish prickliness between our historical heroes, Augustus and Emma. Banter plus Shakespeare-ish-ness plus romance? Sign me up!

My only complaint was Eloise, the modern-day heroine, who has that rather aggravating habit of avoiding her big girl responsibilities and being proactive and, say, talking to her boyfriend. Most of the plot related to her unfolded from her passive refusal to take charge of her life, and I found myself skipping through her portions of the book -- which was fine, since her story was only a fraction of the entire novel. (She's the reason I never finished The Pink Carnation -- I couldn't stand her long enough to get to the historical part.) Blessedly, most of this novel was devoted to our Regency cast and I'm eager to remain firmly in their world. I'm going back and starting The Pink Carnation immediately -- if the ninth book is this good, I can only imagine the other eight!

I'm thrilled to offer a copy of The Garden Intrigue to one lucky reader! To enter, fill out this brief form. Open to US/CA readers, ends 3/9.  For more reviews, be sure to check out the rest of the blogs on the tour!