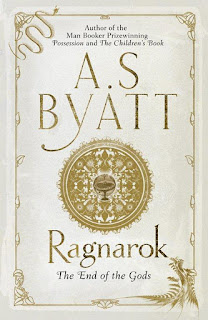 Title: Ragnarok: The End of the Gods
Author: A.S. Byatt

Rating: Liked with hardcore swooning.
Did I finish?: Yes -- savored over a week.
One-sentence summary: A young girl experiences

Do I like the cover?: I do although I don't think it captures the feel of the story, either Byatt's little girl or the Norse mythology.

First line: There was a thin child, who was three years old when the world war began.

Do... I love the Canongate Myth series so hardcore?: YES. I'd elope with it if I weren't already married and it was legal.

Did... I bookmark so many passages because the language was amazing?: YES. 53 of 193 pages were bookmarked because of some gorgeous, delicious turn-of-phrase, and that was me limiting myself!!

Did... I seriously fall in love with line after line?: YES. I struggled to limit myself with my GoodReads status updates.

Why did I get this book?: If it's part of the Canongate Myth series, I'm all over it, and of course, if it's by Byatt, I'm there.

Review: This skinny book is really a novella, closed with a brief essay. And in that way Byatt does so well, this small book on Norse mythology also tells a story of marriage and motherhood, war, loss, escapism, violence. Insidious, along the edges of the larger story, what seems to be a straight-forward retelling of some aspects of Norse mythology actually tells us a story of World War II, Byatt-as-a-child, and the way a good story can help us escape our reality.

Unlike some of the other Canongate Myth pieces, Byatt doesn't twist or warp or reinvent the myth she's chosen. Norse mythology has never been a big passion of mine so I didn't have that immediate connection with the story that I've had with other books but Byatt's (possibly?) autobiographical 'thin girl' and the World War II setting pulled me in. I might not have connected with the story of Ragnarok, but I immediately understood the magic of reading, the absorption of a compelling, alternative world on a lonely imagination.

Byatt's thin girl reads a volume of Norse mythology, an English edition that extols rather warmly the impact of Old German on the myth cycle. The play of the 'good Germans' from the book and the 'bad Germans' of WWII was interesting ("Who were these old Germans, as opposed to the ones overhead, now dealing death out of the night sky", p17) and poignant: enemies and friends are so easily made and unmade.

Unsurprisingly, the language is gorgeous but simple, poetical and lyrical and moving. ("Baldur went, but he did not come back. The thin child sorted in her new mind things that went and came back, and things that went and did not come back. Her father with his flaming hair was flying under the hot sun in Africa, and she knew in her soul that he would not come back.", p86) Byatt's narrative reads like a collection of myths, myth-of-the-thin-girl and myth of Ragnarok, and every page invites rereading.

Byatt's closing essay was interesting -- about why she chose to tell the story as she did, what she had hoped to do, what she didn't do -- but I wish it hadn't been included. I made the mistake of reading it immediately upon finishing, and it took some of the warmth away from the story as I chewed over her analysis rather than the feelings she provoked in me.
* book reviews book rating - liked