The Technologists by Matthew Pearl 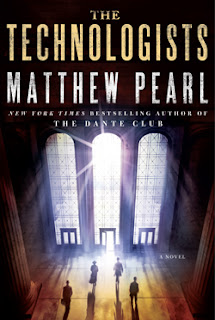 Do I like the cover?: I don't think I have strong feelings about it, although I'm leaning toward 'eh' on it.

First line: Its proud lines intermittently visible through the early morning fog, the Light of the East might have been the most carefree ship that ever floated into Boston.

Do... I love Matthew Pearl's extras?: YES. His website has photographs of some of the characters as well as a prequel available for download.

Am... I totally keen to prowl around MIT now?: YES. I'm deeply saddened that I don't know any MIT grads so I'm going to see if there are any museums or halls open to the public.

Why did I get this book?: I love books set in Boston, and I've long been curious about Matthew Pearl's novels.

Review:  This is a hefty historical (496 pages) with a good chunk of nerdiness, a big cast, and a lovely mix of fantasy and fact.  Set in the late 1860s, the story follows the first class of MIT -- the Massachusetts Institute of Technology -- while the city of Boston is being plagued by bizarre disasters.  In an era when the word 'technology' was feared and the aims of MIT distrusted, the scientific studies pursued by the students was challenge enough, but made all the more difficult as the public accused the school of black magic.

I was telling a friend this book reminded me a bit of steampunk novels with the mix of fantastical technology although, if I understand correctly from Pearl's Afterward, the events and technologies featured were historically accurate. Pearl often had me wondering Is that true? about many an event and tidbit, and I was pretty captivated by that storyline. The novel has a number of diverse plot threads woven through, from the seemingly fantastical technological attacks on Boston to the Harvard/MIT rivalry that shaped the city's investigation of the attacks.

One of the most unique angles for me was the view of Harvard University as parochial and old-fashioned. Whereas the students of MIT were studying science without an overarching theology, Harvard students were not admitted unless they held Christian beliefs. (There's a scene where Prof. Agassiz -- a real naturalist and Harvard professor -- refused admittance of a student because he wouldn't refute Darwin's evolutionary ideas.) It was a fascinating flip for me as I perceive Harvard as quite forward thinking, and as Pearl is a Harvard grad himself, I appreciated his willingness to show his alma mater in a less flattering light.

Overall, a very entertaining read, quite meaty and thick with historical detail and characters. I wasn't emotionally sucked in but I was certainly interested in the characters and plot lines, and I think this would be a great read for those who like history but not necessarily historical novels.

I'm thrilled to offer a copy of The Technologists to one lucky winner! To enter, fill out this brief form. Open to US/CA readers, ends 3/16.