Thank You for Not Reading by Dubravka Ugresic 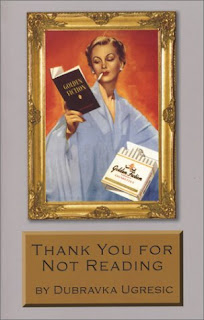 Title: Thank You for Not Reading: Essays on Literary Trivia
Author: Dubravka Ugrešić

Rating: Liked a good deal.
Did I finish?: I did -- the essays are short but punchy.
One-sentence summary: Essays on the Western book industry, from publishers to readers, self-promotion, celebrity authors, and everything in between.
Reading Challenges: Dewey Decimal

Do I like the cover?: I adore it! It's so droll and funny and kitschy, and fits: Ugrešić has an essay about women's work being, literally, smoked. Brilliant.

First line: Anyone who has been through the experience known as completely renovating one's apartment knows that everything is in the hands of the workmen. from "The Seventh Screw"

Buy, Borrow, or Avoid?: Borrow if you're interested in non-fiction about publishing, especially from a disenchanted outsider's view.

Why did I get this book?: I learned about Ugrešić via BookSlut, who featured her newest collection of essays, Karaoke Culture.  The library didn't have Karaoke Culture, so I went with this one instead!

Review: My two-word review for this book would likely be, 'Oh, snap!' because Ugresic pretty much rips on everyone in the literary/publishing world: readers, writers, publishers, agents, advertisers -- everyone but book sellers (sort of, more on that later).

Ugrešić's writing style is wonderful: poetic, biting, passionate, and fiery, and there's nothing in the publishing world she won't attack. From grocery stores selling books to the passion for Umberto Eco among vacationers in Greece, Ugrešić critiques, muses, and skewers the publicity machine that commodifies books and reading. She also looks at the identity of the ex-pat writer, especially Eastern European writers following the fall of the Soviet Union and dissolution of Yugoslavia.

While of the essays feel dated -- they range from the late '90s through 2000 -- they're a lovely insider's/outsider's view of the publishing world and literary machine. Reading Ugrešić, I wondered what she'd think now, a decade later, so I'm wicked impatient to get my hands on her new collection of essays, Karaoke Culture.
* book reviews book rating - liked