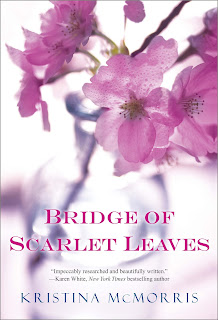 Rating: Liked.
Did I finish?: I did, but I didn't want it to end!
One-sentence summary: Four Americans are deeply impacted by the Japanese American internment in the 1940s.
Reading Challenges: Historical Fiction

Do I like the cover?: I do, but I vastly prefer the UK cover, which exactly captures the feel of the novel.

First line: At the sound of her brother's voice, flutters of joy turned to panic in Maddie Kern.

Do... I love the collection of Japanese-American recipes at the end of this book?: YES. Being a foodie, I love new recipes, and many of these recipes would be great for a book club to use while discussing the book (and the author is available to Skype with book groups!)

Did... I cry during this: YES. Numerous times. In a good way.

Did... I adore McMorris' extras on her website?: YES. She shares the real correspondence between her grandparents from WWII. There's an amazing giveaway for a WWII party for book clubs, photo albums, and other goodies!

Buy, Borrow, or Avoid?: Borrow for sure -- a moving novel of a shameful time in American history.

Why did I get this book?: I love historical novels set during WWII.

Review: While I don't traditionally get my history lessons from celebrities, I was incredibly moved by actor George Takei's comments about living in an internment camp for three years as a child.

I'd had Kristina McMorris' novel in my review queue and was excited to start.  I love historical fiction for making real events in the past, and this book doesn't disappoint.  Maddie Kern, an Anglo American, and Lane Morimoto, a Japanese American, fall in love and decide to elope, much to the displeasure of their families.  They wake the next day to find Pearl Harbor bombed by the Japanese. Overnight, their already misunderstood marriage became something that provoked criticism, critique, hatred, fear, and horror.  The events that followed were worse than they could imagine.

McMorris humanizes this incredibly fraught era, making very real a story that seems too horrifying to be true. It's a part of American history that is uncomfortable, easily ignored, but crucial to remember, and McMorris's novel is an excellent introduction.  Her cast isn't enormous, but even the secondary characters get full stories and personalities, and there was much to hook me.

In fact, I cared about the characters to the point that I actually was quite angry with one of the plot twists -- there was a very tragic event that I could have lived without. I suppose the story needed that gut punch but I felt almost betrayed -- I wanted so badly for something else to happen.

In her author's note, McMorris writes about some of the themes and images she wanted to explore in her book -- brother pitted against brother, families forced to chose country or spouse -- and for the most part, she manages to convey that epic scope while keeping the story manageable and human.  My only frustration with this novel, if anything, was that I wanted more.While a chunky 430 pages, McMorris doesn't focus on every life event, and as a result, some momentous moments are skipped, referred to by other characters in flashback or thought.  I wanted to be with the characters during all their victories and tragedies.  But that's my only quibble, and a small one at that.

Fans of WWII fiction will love this -- it's a lovely contribution to the historical fiction genre and I'm eager to see what McMorris does next!

I'm thrilled to offer a copy of Bridge of Scarlet Leaves to one lucky reader! To enter, fill out this brief form. Open to US/CA readers, ends 3/23.