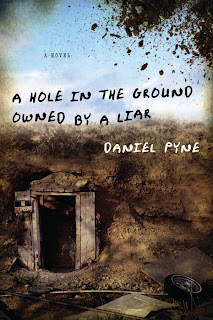 Title: A Hole in the Ground Owned by a Liar
Author: Daniel Pyne

Rating: Loved.
Did I finish?: I did -- I inhaled it.
One-sentence summary: A gold mine in Colorado, purchased off eBay, provides drama, excitement, intrigue, danger, and a ton of muck to a motley group of

Do I like the cover?: I do -- the mine looks as I expect a mine too; I like the marker-y font; and the dirty smear/splash in the upper right hand corner is repeated on all the chapter starts.

Do... I adore the title?: YES. Pyne explains the possible source of the title -- maybe Twain, maybe a contemporary of his -- and regardless of the source, I heart it so.

Did... I find all the mining stuff rather easy to follow, given that I'm not a miner (or geologist)?: YES. Pyne explains what needs to be explained without overwhelming the reader.

Did... I horrify my wife by not knowing who one of the book's blurb-ers was?: YES. Eric Idle offers a hilarious blurb, and I chuckled, and when I passed this book to my wife, she cracked up and 'oohed'. When I failed to respond, she was really disappointed in me, and I got a lot of hectoring and a long lecture. So, FYI, Eric Idle is part of Monty Python. In my defense, I totally recognized him when she showed me his picture.

Buy, Borrow, or Avoid?: Borrow or buy -- this is kind of a Western, only not really, with anti-heroes who aren't really anti- or heroic, a romance that isn't romantic, and a look at family that's touching and twisted.

Why did I get this book?: The title. How can anyone say no?

Review: Look, I'll admit it: rather cattily, I was dubious that a screenwriter -- however successful -- could put out a compelling novel. But the premise -- and fantabulous title -- of this book was too intriguing to resist, so I agreed to take this on to review.

To my (chagrined!) surprise, I loved this book. It's darkly funny, with all these weirdly unlikable-yet-totally-lovable characters, and this almost-too-ludicrous-to-be-believed plot that comes right out of a 19th century mining yarn.

Post-divorce, motivated by a midlife crisis, Lee Garrison, a high school teacher, buys a mine off eBay near his hometown in Colorado. Locating the mine is something of an endeavor: mine claims were obfuscated and hidden to keep thieves away, and within days of his purchase, he's gathered an unwelcome cadre of 'partners', eager to make it rich. Complicating matters is his brother Grant, newly released from prison, and his ex-wife's new husband, a slimy lawyer, and the pretty Rayna, a woman he's uncomfortably interested in.

Unsurprisingly, the dialogue is stellar in this book, laugh-out-loud funny, dark and sharp and sarcastic. There's a scene early on between Grant and his parole officer, dialogue only, that was so delightful I wanted to make out with it. The novel's start was a bit slow for me -- the narrative was a bit long-winded at times -- but as the story went on, I was hooked, and I couldn't stop reading. I didn't want the book to end, either, although I found it immensely satisfying, just what I didn't know I wanted.

I'm not sure how or who to recommend this novel to: it's not a Western, but is strongly influenced by the world of 19th century mining, the lore and backstabbing and intrigue; it's not a romance, but romantic relationships -- new, old, and in-between -- feature in the story as do sibling relationships; it's not a business thriller, but there's drama and greed and plenty of action. This is an amusing and rather moving novel that surprised and delighted me.

I'm thrilled to be able to offer two! readers a copy of A Hole in the Ground Owned by a Liar. To enter, fill out this brief form. Open to US/CA readers, ends 4/20.
* book reviews * giveaways book rating - loved