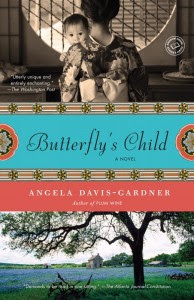 Rating: Liked a great deal.
Did I finish?: Couldn't put it down.
One-sentence summary: Madame Butterfly's child, a Japanese-American boy, is adopted and taken to the US in the late 1890s, and struggles with his adopted country and his emotionally damaged parents.
Reading Challenges: Historical Fiction, Immigrant Stories

Do I like the cover?: I do -- it's very striking and establishes exactly the setting of the story. I'm relieved there are no cherry blossoms!

First line: It is spring in Nagasaki, and the strands of silk she has set out for the mating birds are goen from the maple tree in teh garden, and the mother birds are nestled in silk, but still he has not come.

Buy, Borrow, or Avoid?: Borrow or buy, even if you're unfamiliar with the opera -- it absolutely stands on its own.

Why did I get this book?: I love Madame Butterfly and I'm a huge fan of books that explore what happened after.

Review: Recently I've been dealing with a lot of stress and tragedy in my personal life, so a book with a tragic central premise would not have been my first pick. Frankly, if I didn't have to review this one, I probably wouldn't have picked it up -- and I would have lost out on a truly moving, deliciously sad read.

Inspired by Puccini's opera, Madame Butterfly, the story is set in the late 1890s and follows Benji, a half-Japanese, half-American boy born to a Nagasaki geisha, Cio-Cio. He's adopted at age five when his father, Frank Pinkterton, returns to Japan on his honeymoon with his American wife, Kate. Upon learning of Frank's abandonment of her, Cio-Cio kills herself and begs Frank to take care of their son. Frank and Kate conspire to hide Benji's true birth, and they invent a story about seeing him at a Christian orphanage and being moved to adopt him. They return to their Illinois farm where they live with Frank's mother, the eyes of this small town on them. You can imagine what drama unfolds.

I was very apprehensive about how Davis-Gardner would handle Kate, Frank's wife. I anticipated hating Frank and wanting to take Kate's side, but I am not so stony-hearted as to hate a child, and so I felt some immediate sympathy for Benji. Davis-Gardner felt the same way, I think, for all her characters behaved rather humanly -- and humanely -- and I found myself rather fond and sympathetic of everyone, even Frank (well, maybe not Frank). Kate was my favorite character by far: a missionary's daughter, she grew up in China and had a fondness for the 'Orient', and it was her idea they honeymoon in Japan. It was that trip that led to their discovery of Frank's child, and she understandably waffles throughout the book as to how she feels about Benji, her marriage, and her husband.

The novel explores Benji's childhood and his own search for family, and the way loss seems to beget more loss. There's a twist later in the book that I suspect will split readers, but as sort of improbable as it might be, it worked for me, as it had an operatic feel to it. (Operas have some of the most over-the-top plot twists around.)

You don't need to be familiar with the opera to appreciate this story. Not only does Davis-Gardner include a summary of the opera, but her novel stands alone -- she sets up the whole story within the first chapter, and I dare anyone not to be sucked in. This isn't a fan fic of the opera, either, but a very real examination of adoption, identity, love, depression, and early 20th century farm life. There's a blurb from Jennifer Egan on the back, about how the book "dominated" her thoughts after finishing, and I have to agree: this isn't a book I could shake off. I chewed it over, savored the sadness, and wondered at what could have been done differently. (This would make a great book club selection!)

I'm thrilled to offer a copy of Butterfly's Child to one lucky reader! To enter, fill out this brief form. Open to US/CA readers, ends 5/4.  For another entry, be sure to check out my interview with the author, Angela Davis-Gardner.