The Dragon's Harp by Rachael Pruitt 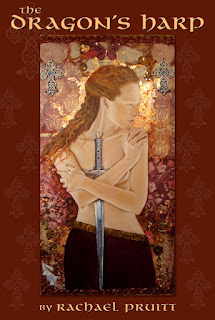 Rating: Liked.
Did I finish?: I did.
One-sentence summary: The early years of Gwenhwyfar, future queen of Arthur, in the rough, dirty, and bloody world of 6th-century Wales.
Reading Challenges: E-book, Historical, Witches & Witchcraft

Do I like the cover?: I rather do -- it's pretty non-traditional for historical fiction with the half nude figure and the bound hair. The style reminds me of a tarot deck, oddly enough, which appeals to me!

Did... I smile at the exuberant Acknowledgements?: YES. I always scan them to see who authors thank, and in this case, I felt like I got a glimpse of Pruitt herself, and I loved it.

Did... I appreciate the inclusion of a pronunciation guide for the Welsh names?: YES. Typically, I end up just sort of mentally mumbling over the names I can't pronounce, so Pruitt's guide was super helpful.

Buy, Borrow, or Avoid?: Borrow or buy, especially if you like meaty historicals and a saga-like series.

Why did I get this book?: I'm an Arthurian fangirl, all the way.

Review: A five book series about Guinevere (or Gwenhwyfar, as she's called in this book) is pretty ambitious but Pruitt's first book is promising. Covering about fourteen years, the novel follows Gwenhwyfar when she's 8 through her early 20s. Pruitt's story is set very firmly in the 6th century world of Wales, and it's dirty and mucky and bloody. This isn't a clean, late medieval-ized version of the Arthurian myth, which I liked immensely. This book reminded me strongly of Marion Zimmer Bradley's The Mists of Avalon, another sprawling, epic re-imagining of the Arthur legend. It's a favorite of mine and so I was a bit apprehensive if I'd be sympathetic to Gwenhwyfar, and thankfully, Pruitt's Gwenhwyfar is miles away from Bradley's. (I suppose she's closer to the Guinevere from the 2004 King Arthur film.)

Mixing gritty history and magic, Pruitt's novel had the elements I love in historical fantasy: action and magic, mythological creatures, atmospheric location, huge personalities and big plot drama. I can't attest to the accuracy of her research or depiction of 6th-century life, but there's an epic Author's Note at the end detailing her research for those who care. I was a bit surprised about how often women were involved in violent conflict, but otherwise, I didn't feel as if Gwenhwyfar was exceptionally anachronistic in behavior or manner. Pruitt's description of place was particularly good, very evocative, and despite being unfamiliar with the era, I could easily imagine what life in that fortified castle was like.

My only complaint would be the pacing. Clocking in at about 300+ pages, I felt the story could have been a bit tighter -- there were times when I skimmed and I felt some section could have been trimmed -- but otherwise, I ripped through this story.

I'm excited for Pruitt's next book, eager to see what happens with Gwenhwyfar. While I'm a bit impatient with multivolume historicals, I do like the idea of having a ton of space to really dig in to the legend, and I'm very curious about how she takes on the well known and well loved characters from Arthurian myth.

My thanks to Ms. Pruitt for her time.  Learn more about her online via her website, Facebook, or Twitter.  Follow the tour on Twitter at #DragonsHarpVirtualBookTour.  Be sure to check out the other blogs on the tour for more reviews and special features.  See my interview with Ms. Pruitt for another chance to enter.

The giveaway is for one eBook and open to US only. To enter, fill out this brief form. Open to US readers only, ends 4/27.