The Flower Reader by Elizabeth Loupas 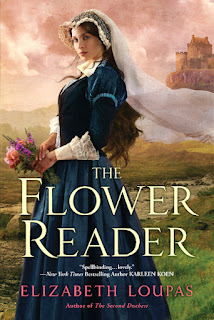 Rating: Liked.
Did I finish?: I did.
One-sentence summary: A French-Scottish noblewoman with the ability to see the future with flowers is given a royal artifact with dangerous secrets.
Reading Challenges: Historical Fiction

Do I like the cover?: I do -- although I don't think it matches my mental image of the heroine, I love that she's not blonde and that we see her whole face. It's a very striking cover -- I especially adore the costume.

First line: I hated the queen, hated her down to the deepest marrow of my bones.

Buy, Borrow, or Avoid?: Borrow for sure -- this is a fun variation on the typical British royal drama.

Why did I get this book?: I'd heard nothing but love for Loupas' first novel so I had to read this one.

Review: If I had to come up with a super pithy summary, I think I'd describe this book as royal intrigue meets CSI, with a fringe of Medium for good measure. Set during the 1560s, the story follows Marina "Rinette" Leslie, a Scottish noblewoman with a gift for floromancy, or the ability to read the future in flowers. Following the death of Mary of Guise, queen-regent of Scotland, she's bequeathed a silver casket containing coded journals for her daughter Mary, Queen of Scots, and predictions from Nostradamus. Unsurprisingly, her possessing these documents causes non-stop drama including murder. In a word: fun.

I didn't immediately fall in love with Rinette but I quite liked her, especially as the story went on. She's a strong heroine (falls into 'feisty' category which normally provokes eye rolls from me, but her bursts of fieriness didn't feel wholly anachronistic) who remains consistent throughout the story. The divinatory aspect of the novel was pretty muted, I thought -- I would have loved more floromancy as it was such a unique hook and plot device -- but mostly Rinette used flowers as a way to nail personalities in people (blah blah is like a rose or blah blah is like nightshade, etc.).

A word of warning: don't read the Cast of Characters too closely before starting the novel novel -- I caught wind of a major plot point that I spent two hundred pages fretting over.

This historical novel has the feel of a thriller -- lots of intrigue as everyone and their mother, literally, vie for Rinette's casket -- and for the most part, this was a winner of a book. The massive cast was easy to keep clear and the plot was full of drama and removed enough from history to not make me twitch and wince. I raced through this book gratefully while parked at the vet over the weekend until I hit what might be my all time least favorite plot device in the history of ever: rape of the heroine (and in this case, she was married to her rapist). Ugh. Perhaps historically accurate, but just too much for me. I actually gave up on the book for a time because I couldn't shake the 'ick' feeling. In the end, curiosity about Rinette compelled me to pick the book up again and I'm glad: there was a happily-ever-after ending that satisfied me.

For a unique angle in Tudor/Mary of Scotland historical fiction, consider this novel. The majority of the characters in the novel are Loupas' invention, which I enjoyed as I didn't need to worry about the veracity of their actions. The intrigue of Nostradamus' predictions and the missing silver casket didn't get in to Dan Brown territory; rather, this remained a historical mystery set at court in Scotland. Very readable, and great fun.

I'm thrilled to offer a copy of The Flower Reader and a unique flower bookmark to one lucky reader! To enter, fill out this brief form. Open to US only, ends 4/27.

For another entry, check out my interview!