The Magnificent Ambersons by Booth Tarkington 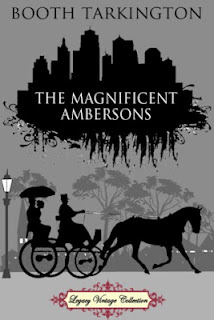 Rating: Liked.
Did I finish?: I did!
One-sentence summary: The rise and fall of the Amberson family, a darkly funny look at Midwesterners in the late 1910s.
Reading Challenges: E-books

Do I like the cover?: I love it -- I'm a sucker for silhouettes anyway, and the phaeton image reminds me of the opening of the novel.

First line: Major Amberson had "made a fortune" in 1873, when other people were losing fortunes, and the magnificence of the Ambersons began then.

Buy, Borrow, or Avoid?: Borrow or buy; this edition is available online from the Legacy Romance store for $1.99

Why did I get this book?: I've always wanted to read this -- Booth Tarkington has always been on my TBR.

Review: Winning the Pulitzer Prize in 1919, this book has always been on my vague to-be-read list. Now and then, I think I want to read all the Pulitzer winners, or fiction from the early 20th century, etc. etc. so I was excited to be part of the blog tour for this release. Somehow, I've managed to not only never read this book but also never see any of the film or t.v. versions, so I was really unsure of what I was getting into -- but I immediately loved Tarkington's writing from the first chapter.

The story follows first Isabel Amberson, who falls for -- but doesn't end up with -- Eugene Morgan, and later, Isabel's son Georgie, who falls for Eugene's daughter Lucy. From the start, I was captured -- I was reminded of golden era, 'perfect family' fictions like Meet Me in St. Louis -- as well as more dark explorations of families and the rise and fall of fortunes, like Margaret Oliphant, Anthony Trollope, The Forsyte Saga, and Jennifer Haigh. Tarkington's writing style seems a bit ornate, but there's a sly, sarcastic humor in his writing that had me constantly snortling and chuckling. He paints the affluent suburb where the Ambersons reign, capturing that tumultuous era of horse-and-carriage and early automobiles, of industry and agriculture, and the slightly shifting mores of late 19th century and early 20th century. In some ways, this is more than just a family saga, but an exploration of technology and industry and the impact on society.

Unsurprisingly, I was fonder of the women in this story than the men; darling Georgie, frankly, was so aggravating I could have done without him, but I adored the women in his life, from his mother Isabel, aunt Fanny, and love interest, Lucy. I was less enamored of Georgie's romance with Lucy but as I felt rather affectionate toward his family, I wanted badly to see how things would end up for him and his mother -- and the ending gave me a little twist in my chest. At about 270ish pages, this isn't a long read, but there's enough there to fall in love with this fussy, delusional, selfish, and endearing family. (Also: this is the second book in a trilogy, although I haven't read the first book and I don't think one needs to in order to enjoy this one.)

A comment about this specific e-book edition: I love the font size and formatting! Too often, I find myself having to magnify the text of my e-books to, like, one million in order to read easily (especially ones put out by Harper and their imprints), so I was relieved to discover this edition reads easily without magnification. No weird formatting, and I enjoyed the color picture gallery at the end which helped me to visualize the era.
* book reviews book rating - liked