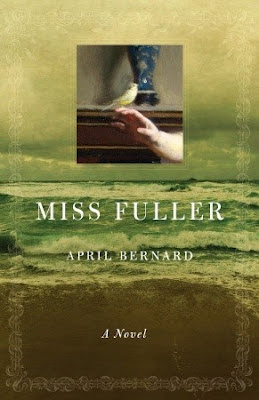 Rating: Loved.
Did I finish?: I did -- I even reread it to savor the language!
One-sentence summary: The life of 19th-century American feminist, Margaret Fuller, as seen through an unsent letter after her tragic death.
Reading Challenges: Historical Fiction

Do I like the cover?: I do -- it captures two elements of the novel rather uniquely!

First line: News of the wreck made everyone want to be up and going, doing something, talking, moving, to keep the knowledge from puddling and festering.

Am... I super excited to see the author at her reading this week?: YES. Expect another fangirl photo with me grinning like an idiot!

Did... I kind of hate those crotchety Transcendentalists for being jerks?: YES. I'm not an Emerson or Hawthorne fan anyway, but this book confirmed my irrational dislike for them!

Buy, Borrow, or Avoid?: Borrow or buy -- this is a lovely, moving, wonderful historical novel about a forgotten American figure.

Why did I get this book?: I'm a Margaret Fuller fangirl.

Review: Margaret Fuller might be one of the most famous American women you've never heard of; I really learned of her when I read The Margaret-Ghost by Barbara Novak. Since then, I've been pretty hot for her, and so I was over-the-moon to learn about a new novel about her and her life.

April Bernard's novel didn't disappoint, and I don't think one needs to be familiar with Fuller to appreciate and enjoy this story. Set in 1850, the novel opens with Fuller's tragic death -- a shipwreck that claimed her as well as her husband and son -- and Henry David Thoreau combing the beach for their bodies and their effects. His younger sister, Anne, muses on Miss Fuller and her legacy, her thinking, her life. But a good portion of the novel is an unsent letter from Margaret Fuller to Sophia Hawthorne, Nathaniel Hawthorne's wife, and it shows us Fuller's real fears, passion, and blind admiration for those in her life.

In some ways, the novel is less about Fuller than about the people around her, the men and women she called friends and loved like family, and the uncomfortably cold way (to me) they dissected Fuller and her life. This is a novel about reputation, too -- at least, that's something I took away. As Melanie Benjamin's Alice I Have Been made so clear for me, Fuller has to be accountable to the ludicrous judgments of the men around her. Her wisdom is tied in to her 'purity', and her normal, reasonable, understandable choices become the fodder with which the people she idolizes disparage her.

That the author is also a poet is no surprise, as there's a really lovely sense of language here, neither heavy nor ethereal. I'm reminded of other poetic novelists, like Anne Carson, and master wordsmiths like Ellen Feldmen and A.S. Byatt.

That was the clear end, the major crashing chord, of the essay. Although Miss Fuller threw in a bad poem treacled with high sentiments to close, Anne held the phrase a complete life of its kind and knew she would not forget it.

The awkward, herky-jerky force of the essay, rather like an electric eel, twisting, brilliant, sparkling -- that, and the heat-lightening flashing and filling the window-panes -- kept her awake until dawn. (p58)

This is a smart, quiet novel that provoked righteous indignation in me -- and inspired me to look up Bernard's other works. Language lovers, feminists, historical fiction fans, and anyone who enjoys learning about long forgotten historical figures will enjoy this slim novel. (I reread it about a week after finishing -- I couldn't help myself!)
* book reviews book rating - loved