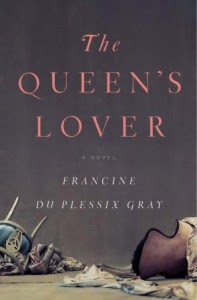 Do I like the cover?: I adore it. Maybe my favorite cover of 2012 so far. It's so unusual and unique for a historical novel to feature something other than a headless woman in costume! The layout, the colors, the passionate emptiness...so good!

First line: My late brother, Count Axel von Fersen, was a notorious seducer, known through Europe as 'le beau Fersen' and in our Swedish homeland as "Lange Fersen", "tall Fersen".

Buy, Borrow, or Avoid?: Borrow or buy -- this is a great, unique novel!

Why did I get this book?: I'm a Marie Antoinette fangirl!

Review: Okay, so, I admit it, when I saw the hero of this novel was Axel von Fersen, I immediately thought of so-dreamy-makes-lesbians-faint Jamie Dornan, who portrayed von Fersen in the 2006 Marie Antoinette. Nummy. Needless to say, that mental image helped make this novel especially awesome. But even if your mental image of Swedish courtiers isn't shaped around twenty-something Irish actors, I still think you're really going to dig this book.

Told in parts by von Fersen himself -- by way of his memoir, discovered by his beloved sister Sophie -- and Sophie, filling in the blanks, the story starts with von Fersen's introduction to Marie Antoinette. Despite the title, however, this novel isn't the story of a love affair, but rather, a kind of fictional autobiography by a man whose most notable distinction is that he was, once, Marie Antoinette's lover.

The end of the 18th century was a tumultuous time, and von Fersen participated in some of the most momentous events. Fighting in the American Revolution with French troops, witnessing the French Revolution firsthand, and later, the sweeping political change in Sweden, I was captivated by his life. (I had no idea that pretty face had such an interesting back story!)

I'm struggle with how to describe the writing style, the feel of the narrative; this is a very biographical novel that reads, almost, like a piece of non-fiction. However, that worked for me: it was easy to imagine this is how von Fersen would compose his autobiography -- very precise, attempting some distance and not always succeeding. The chapters are titled with the 'author' -- either von Fersen or Sophie -- and Sophie's tone is admiring and warm. If this sounds like a disjointed way to tell a story, I promise it fits together better than I'm articulating.

Like any good historical, I was sad -- heartbroken -- to finish this book, as the novel ends with von Fersen's death. While the jacket blurb describes this novel as a 'fresh vision of the French Revolution and the French royal family', I would actually argue that this is a fictional biography about an eyewitness to 18th century revolution. The French Revolution is a major part of the story -- and certainly shapes von Fersen -- but this book is far more about loss, love, and the reality of lofty philosophical ideals.

I can't rave about this book enough; I was taken by surprise with how much I enjoyed it and von Fersen.

(Also, if you, like me, are unfamiliar with Francine du Plessix Gray, this Paris Review article and interview provides a great introduction to a fascinating woman!)

I'm thrilled to offer a copy of The Queen's Lover to one lucky winner! To enter, fill out this brief form. Open to US/CA readers, ends 5/18.