Teaser Tuesdays is a weekly bookish meme, hosted by MizB of Should Be Reading. Anyone can play along! Just do the following:


- Grab your current read & open to a random page
- Share two (2) “teaser” sentences from somewhere on that page (be careful not to include spoilers!)
- Share the title and author, too, so that other TT participants can add the book to their TBR Lists if they like your teasers
Sadly, I'm a bit off schedule this week due to a business trip, so reviews that I planned to post yesterday and today just aren't happening. Instead, I offer a Teaser of my current read, Miss Fuller by April Bernard. A novel about the famous 19th century philosopher Margaret Fuller, the story is told by Anne Thoreau after Fuller's tragic death. As she tries to come to terms with the complicated woman Fuller was, she also learns about what it means to admire someone, to understand someone, and to love someone. It's a wonderful book that makes human the Transcendalists and Abolitionists, the Boston thinkers so revered here -- and their complicated, flawed beliefs.

My teaser is early on the book, a conversation between Anne and her brother, Henry David Thoreau, on Margaret Fuller-Ossoli, her possible marriage to an Italian, and Fuller's two-year-old son Angelo. 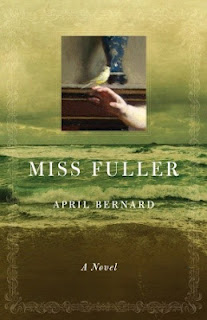 He told Anne about Emerson's planned "Memoirs" and also about the money that had never been sent to the Ossolis.

"Were they punishing her?" Anne asked.

"I don't think so. They wanted her to come home. We all wanted that."

"Indeed. I'm afraid I don't see why." Anne was surprised to find herself taking Miss Fuller's part. "No one wanted her to marry an Italian, so they wouldn't want to meet him either, would they?"

"They wanted everything to be proper -- up to standard. It would be best for the child," said Henry.

"He was an Italian child, wouldn't he be best living in Italy?"

"He was also American. All Americans are best living here."