I, Iago by Nicole Galland 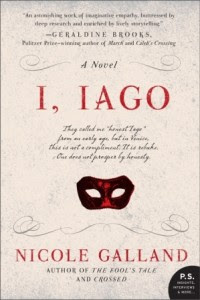 Rating: Loooooooooooooooooooved.
Did I finish?: I did -- I couldn't put this down!
One-sentence summary: Shakespeare's Iago is made human in this novel imagining his life before his horrifying and tragic choices causes him to lose everything.
Reading Challenges: A-to-Z, Historical Fiction

Do I like the cover?: I do -- the mask is evocative of Venice, and reminds me a bit of the comedy/tragedy masks that usually hint at the theater. It's a bit text-heavy for my tastes but I like the fonts used!

First line: They called me "honest Iago" from an early age, but in Venice, this is not a compliment.

Did... I get a bit swoon-y at the author's real life overlap of Iago and romance and catharsis?: YES. This paperback is a P.S. edition, so there's a lovely Story Behind the Story essay about Galland's working with an actor who was unfamiliar with Iago's story and what happened as a result. Turns out, that story has a story behind it, which Galland shares with BermundaOnion on her blog, and it is absolutely worth reading. I got teary.

Did... I kind of crush on evil bad boy Iago?: YES. I'm not even prone to liking bad boys/bad girls/bad people, but Iago was a bit dreamy. (What does that say about me???)

Buy, Borrow, or Avoid?: Borrow or buy -- this is a meaty Renaissance historical that doesn't depend on a reader's familiarity with Shakespeare to enjoy.

Why did I get this book?: I love novels that explore the background of villains, and who is more villainous than Shakespeare's Iago?

Review: It's pretty ballsy to take one of Shakespeare's most famous characters and write a novel about him from his viewpoint, and there are tons of opportunities to make a horrible misstep. However, Nicole Galland's novel about Iago is awesome. It's straight up a great read: a meaty historical that is rich with detail but doesn't drown the reader, thick with evocative characters and exotic locales, dramatic plot and wonderful writing. Being unfamiliar with Othello isn't a problem, as Galland's story is set squarely with Iago, and we're with him from his youth through to the horrible, tragic end.

Set in Renaissance Venice, we meet Iago, the redundant fifth son of prosperous silk merchant, gifted to the military when his older brother dies in a stupid accident. Blunt Iago, too honest to be a politician or merchant, finds a place for himself in the bare, rough work of soldiering, and in that, he finds honor, notoriety, and some fame. Galland's characterization of Iago was what sold the book for me; from the first page, I knew exactly who he was. I'm super picky about being told a character has x attribute but never see the author demonstrate that; in this book, Iago is known for his bare honesty, his grouchy wit, and his monstrous intelligence, and Galland shows that over and over again. If you like bad boys, you're going to love Galland's Iago. I was charmed by him; I felt sympathy for him. I even admired him.

As a historical novel, this satisfies: Galland articulates the dramatic, artificial world of upper class Venice, the ponderous boredom of Italian infantry, and best of all, Venetian celebrations. Costumes, foods, architecture -- rich descriptions that helped me escape cold, rainy Boston.

And the end, oh, the end. I knew how things would shake since I'm familiar with Othello, but following Galland's Iago to the inevitable was heartbreaking -- even if he was a monster.

I didn't anticipate loving this book as much as I did since I far prefer to follow women rather than men and I'm a big wimp about violence toward women. And yet, Galland's character study was so fleshed out and human, I was captivated -- mesmerized -- by Iago, and I had to know what happened. I had to know why. Her supposition, her imagining of the world and circumstances that drove Iago to do what he did made sense to me, felt real to me, and still left me shocked and devastated. (In, of course, the best way, the way a really good book can do -- and make one feel grateful for the experience!)

I'm thrilled to offer a copy of I, Iago to one lucky reader! To enter, fill out this brief form. Open to US/CA readers, ends 5/18.